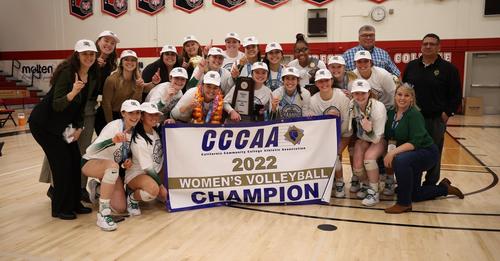 The Feather River College women’s volleyball team needed one more validation of its greatness in the 2022 season. It had to beat the team that handed it its lone loss–American River on opening day–and it got that opportunity on Sunday in the CCCAA State Championship final. The Golden Eagles took care of business with their 34th consecutive victory in sweeping the Beavers, 25-20, 25-16, 25-21. FRC won its second state title after capturing its first championship in 2019.

In both cases, a setter from San Leandro High in Oakland was the MVP of a state tourney for Feather River. After Mere Nagase led FRC to the ’19 state title at Southwestern College, a friend of Nagase and fellow San Leandro alum Nellie Stevenson put on a clinic to win MVP honors for this year’s Golden Eagles. The sophomore Stevenson spread out the wealth for 33 assists, floored eight kills, made two aces, two blocks and had seven digs in an all-around performance worthy of top player honors. She finished with 17 kills, 96 assists, and 17 digs in the three state tourney wins.

Feather River finished the year by winning its final 43 consecutive sets, including nine in a row at state.

FRC head coach Sarah Ritchie said, “It all comes down to preparation. We won our semifinals match v. San Mateo yesterday, then we watched the Delta-ARC match and went back to the hotel and watched the film again. Then we watched it again this morning. We do all of that type of studying the other team because at game time, we are calm, prepared, and the players understand exactly what they need to do.”

All-Tourney selection and opposite Hannah Taylor also had a phenomenal state performance, recording 16 kills (hit .310) in the finale. She totaled 49 kills and hit at a tremendous .424 clip. Other standouts in the final were Carissa Chainey with a double-double on 10 kills and 11 digs, Sydnee Rowe with six kills in 12 swings (.500), Eliana Sheridan scoring six kills, six set assists, and 10 digs, Seriah Mckinney tallying three kills and four blocks, libero Ava Saiers with nine digs and Katherine Gee adding eight digs and four set assists.

Stevenson said, “We were very focused on the fact American River had beaten us. We felt ARC was beatable. We wanted our revenge. We wanted our redemption. I’m always looking at who’s hot, and who’s not, so whether it’s Taylor or Chainey, I want to go to the hot hand as much as possible.”

American River head coach Carson Lowden said, “We were statistically very good, low in errors, but it came down to not creating enough chaos to disrupt Feather River’s offense. That led to some big runs for them. When FRC is in system, it’s tough to stop.”

ARC was led once again by the uber hammer swing of Aweline Fakalata, who scored 16 kills (hit .367) with six digs. Kylie Matthews had five kills and 10 digs and Mia Santos contributed five kills.

Fakalata, a rare 2-time selection to the All-State Tourney team, said about her powerful swing, “I’ve been playing volleyball since I was 11, and I honestly just try to hit the ball as hard as I can. Because we beat them the first time, I think Feather River was very prepared and wanted to get us back. I love my team and they are like family, all my sisters.”

In the opening set, American River played mistake-free ball, taking a 13-11 lead on a kill by Mia Santos. Feather River rode the Taylor hit show the rest of the set as she pounded five of her eight first-set kills in a 7-4 run that closed out FRC’s 5-point win.

ARC thought it was in good position to tie things, taking a 10-6 lead in set #2. Feather River answered with the tourney’s biggest scoring run, a 11-1 rally that was full of smart passes, great sets, sound digs, and big blocks. Stevenson served for six straight points. Stevenson had a hand in 18 of her team’s points, including 13 helpers, two aces, two kills and a block assist. A Rowe kill capped the 9-point set #2 triumph.

In the final set, ARC led 8-7, and was tied at 14-14, but Feather River, as it has done often this season, got hot late in the game. The Golden Eagles went on a 7-1 spurt, including three kills by Rowe, a player who missed the first ARC encounter due to injury. Taylor knocked down match point to start a huge celebration with a large contigent of fans from Quincy to root on the team with chants of “FRC! FRC!”

Ritchie talked about the support of the fans. “We have such incredible support by the parents and our college. So many fans came down to root us on and it fires up our troops. Hearing those FRC cheers just added to our motivation.”

On making four straight trips to the state tournament, Lowden said, “It takes a collaborative effort. It requires support of one another and not focusing on one self. Each player is supporting the others and that creates positive energy. This 2022 team was a great core group of sophomores and one of my all-time favorite teams to coach.”

The North Region won its seventh state title in the last nine tourneys and put together a second straight season of advancing all four NorCal seeds to the semifinals.