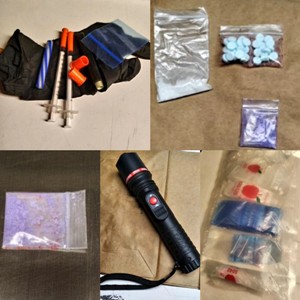 Friday, October 7, 2022, at midnight, an Officer with the Susanville Police Department initiated
a traffic stop on a 2002 Cadillac Escalade for a traffic violation near Hall and Third Street.

Officers contacted the driver and observed what appeared to be suspected narcotic residue on the
driver’s pants. The driver was asked to exit his vehicle. When exiting the vehicle, officers
observed prescription pills in plastic baggies lying on the driver’s seat.
The driver was detained and identified as 31-year-old, Ryan Anthony Bock of Susanville. It was
discovered Bock’s driver’s license was suspended and he had an active Felony Arrest Warrant
from Plumas County.

Search incident to arrest, Officers located baggies containing suspected methamphetamine
packaged for sale, numerous prescription medications and $3,225 dollars in US Currency.
Susanville Police K-9 Zeke was utilized during the traffic stop. K-9 Zeke made positive alerts for
the presence of narcotics while walking around the vehicle.