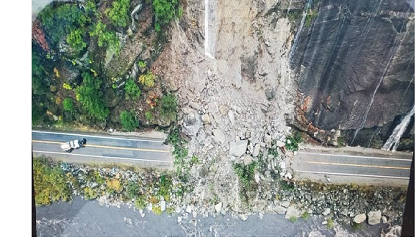 Hwy 70 remains closed after the storm caused a landslide across the hwy. We spoke to Mike Mogan, Project Manager with CalTrans District 2, who says due to the large size of the debris in the roadway they have to blast the boulders to more manageable sizes. The closure will be in effect for some time and there is no estimated time of reopening. Nearly 5500 yards of debris is estimated to have fallen across the hwy. If you need to travel through the area plan ahead as there is no detour for this closure, and hwy 89 and 36 continue to have delays due to construction and hazard tree removal. Additionally the Oro Quincy Highway is currently closed between Junction House and the Butte/Plumas County line due to an area of roadway failure due to the recent storm as well.

And do slow down through all these areas. Be aware of the multiple stops and delays along the way. There was a minor injury accident along hwy 70 just east of the old hwy. A man driving around a curve had to suddenly swerve to avoid hitting the line of stopped cars in front of him who were waiting to be let through the one way traffic control stop. The man veered into the oncoming lanes that thankfully only resulted in a minor injury and vehicle damage.