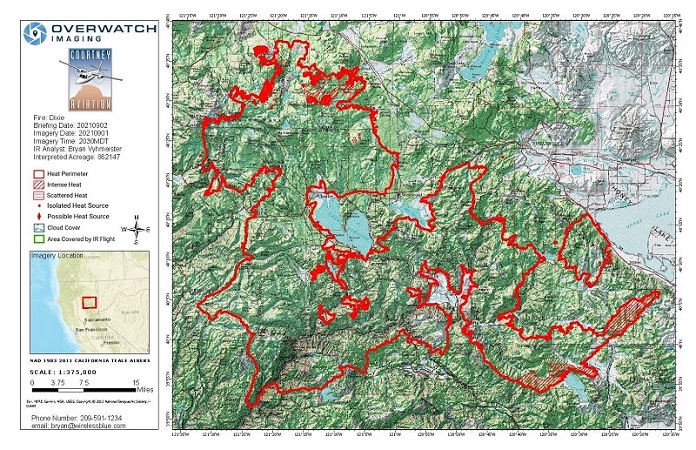 Forest Service News Release
Dixie Fire Update for Thursday, September 3, 2021
868,781 Acres 55% Containment 3,860 Total Personnel
Lassen and Plumas National Forests — Resources are positioned to keep the fire from spreading east and
north towards Dixie Valley and Milford as well as south towards Clover Valley and Portola. Crews will construct
line directly on the fire’s edge and work in coordination with the West Zone to get around the finger-shaped
blaze from Queen Creek to the escarpment and bring in air resources to keep fire from impacting Milford and
HWY 395. Shifting winds will challenge crews throughout the day. Crews will continue to prepare and defend
structures in Milford. The containment line from the west side of Lake Davis to Grizzly Ridge and north to
Taylorsville will continue to be reinforced, mopped-up, and patrolled to protect the HWY 70 corridor. Ten
handcrews of soldiers from Joint Base Lewis McChord will join the fire fight today, assisting firefighters in
Genessee, Grizzly Ridge, and Clover Valley areas. Structure protection remains in place within Clover Valley,
Dixie Valley, Genesee, Taylorsville, Greenhorn, and Cromberg.
Dixie Fire West Zone – The fire continued to burn actively through the night with terrain driven winds. The
northern portion of the fire burned in the understory with isolated torching in the northern section west of
HWY 44. The southern portion of the fire burned downslope towards HWY 395 until the winds subsided and
started to change direction about midnight. Crews from the West Zone are assisting the East Zone to complete
contingency lines both north and south of Janesville and Milford. Fire crews will continue to use old control
lines from previous fires, where applicable, as well establishing new lines. Fuel moistures are historically low,
and Northern California remains under Fuels and Fire Behavior Advisory. Today, light east to southeast winds
are forecasted across the east of the fire area.
Residents are encouraged to stay vigilant and to monitor evacuation information and road closures, including
social media and local law enforcement websites for the most current information. Residents will see smoke
coming from trees and stumps for days following their return. Proceed with caution because burned out areas
may have unseen hazards. Residents are encouraged to call 911 if they are concerned about any active flames
near their homes or businesses. Damage assessment remains ongoing. Change in threatened structures due to
new Evacuation Warnings in Lassen, Plumas and Shasta County.
Follow QR Code or link below for contacts and additional information
LINKS – InciWeb the Incident Information System (nwcg.gov)