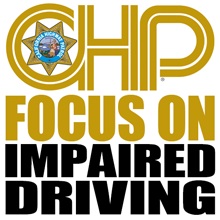 THE CHP GETS ‘GREEN LIGHT’ FOR ITS STATEWIDE DUI CAMPAIGN
SACRAMENTO, Calif. – The California Highway Patrol (CHP) and the California Office of Traffic
Safety are partnering on a campaign aimed at reducing the number of crashes caused by impaired
drivers. The Impaired Driving Reduction (IDR) education and enforcement campaign, which began
October 1, 2021, continues through September 30, 2022.
In 2019, impaired driving crashes were responsible for 568 deaths and 11,444 injuries within the
CHP’s jurisdiction throughout the state. Each one of these injuries and deaths represents a
preventable tragedy and a continued need to focus efforts on reducing impaired driving in California.
“This grant will help support the Department’s mission by strengthening education and enforcement
efforts throughout the state,” CHP Commissioner Amanda Ray said. “As a public safety
organization, we will continue to do everything in our power to promote safety for all on California’s
roadways.”
In 2020, more than 90,000 violations for driving under the influence (DUI) of alcohol and/or drugs
were cited by CHP officers through California. The IDR grant provides the CHP with funding to
conduct additional saturation patrols, checkpoints, and traffic safety education efforts throughout
California. These efforts are designed to remove impaired drivers from the roadway and educate the
public regarding the dangers of DUI. Additionally, the CHP will actively participate in California’s
Drive Sober or Get Pulled Over public awareness campaign.
The CHP wants to remind the public, “DUI Doesn’t Just Mean Booze.” Alcohol, cannabis, certain
prescription and over-the-counter medications, illegal drugs, or any combination can affect your
ability to drive and will result in an arrest if you are under the influence. Always make good
decisions and plan ahead by designating a sober driver, take public transportation, or call a taxi or
ride-share. There is always a better option than getting behind the wheel while impaired.
The public is encouraged to call 9-1-1 if they observe a suspected impaired driver. Be prepared to
provide the dispatcher a location, direction of travel, and vehicle description.
Funding for this program was provided by a grant from the California Office of Traffic Safety,
through the National Highway Traffic Safety Administration.
The mission of the CHP is to provide the highest level of Safety, Service, and Security

CHP Says Not to Rely on Luck this St. Patrick’s Day

From Black to Green