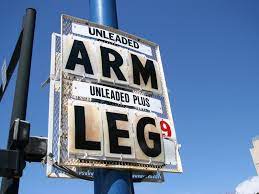 California’s average gas price is at a new all-time high.

The statewide average as of Monday, November 15 is $4.68 a gallon. That surpasses the previous record sent in October 2012 when the California average was $4.67.

Triple A said heavy rainstorms in Northern California have pinched production capacity, which then trickled down to Southern California, just like what happened in Louisiana with Hurricane Ida.

Triple A said they are seeing a supply crunch until the refineries in Northern California can get back up to full production capacity,

Prices are pushing $5 in some areas, including Northern California’s Humboldt County, where the average price is $4.97. The Bay Area has surged to over $4.80.

In Redding gasoline prices average $4.66 a gallon, an increase of three cents from last week.

In Chico the average is $4.58 a gallon, an increase of four cents since last week.