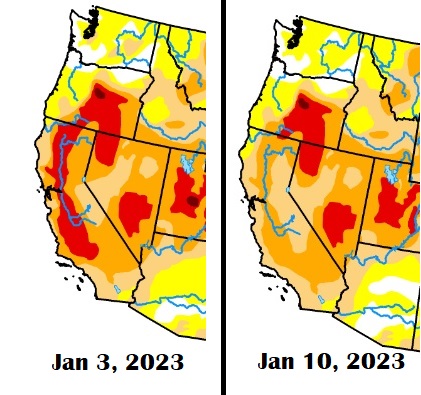 The Drought monitor outlook updated weekly says the recent bombardment of atmospheric rivers on the states has significantly reduced the drought.

Precipitation totals exceeding 4 inches (liquid-equivalent) were widespread, and several areas in and near the Sierra Nevada, Cascades, and coastal ranges recorded over one foot of precipitation. Most of the state reduced in drought intensity by one level, moving out of (Extreme and Exceptional Drought levels to Moderate and Severe. Although not completely wiping out the historical drought the National Drought Mitigation Center contributes that to the last two to three years the state has has extreme moisture deficits. Chris small comb with the reno national weather service agrees more rain is needed, that a few years of above average rain will be what leads to busting the historic drought. The heavy rainfall has provided a generous boost to reservoir stores, through the center says most are still below the long-term average for this time of year. During the next week more heavy precipitation is expected across California as another series of storms line up with parts of the Sierra Nevada, Cascades and northwestern California expected to receive another 4 to 7 inches of rain. The Climate Prediction Center’s 6-10 day outlook shows above-normal precipitation is favored.