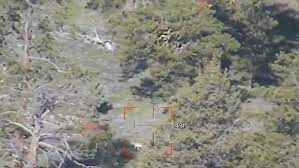 A high-tech infrared camera spots a Lassen County wolf’s den in Oregon. The Oregon Fish and Wildlife troopers typically use the camera to spot poachers and missing persons. In contrast, radio collars track wolves, and trail cameras monitor their pups. Yet, in a new approach from 10,000 feet above the ground, the video was captured in a flyover from one of the Oregon State Police Fish and Wildlife planes to monitor the pups to have a more accurate wolf count completed at the end of the year.

According to the Center for Biological Diversity, The Lassen wolf left its birth pack in late 2020 and paired with the Oregon female wolf immediately after, establishing a relatively new wolf family. Troopers spotted the den in the southwestern part of the state.

Scientists believe the Lassen wolf’s travel to be the first documentation of a wolf traveling from California into Oregon. If they have at least two pups survive until the end of December, the pair will count as a successful breeding pair whose territory covers Klamath and Lake Counties.