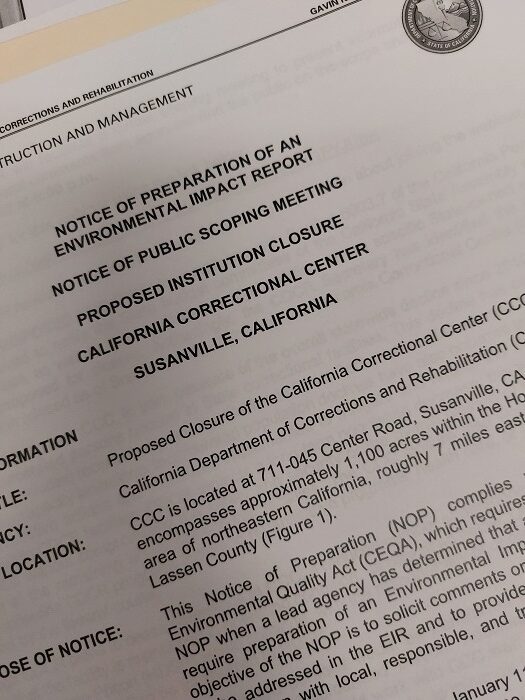 The Lassen County Board of Supervisors will discuss the draft of a letter providing the supervisors comments in response to the Preparation of the Environmental Impact Report (EIR) for the now proposed closure of the California Correctional Center (CCC). All comments are due to be submitted to the Senior Environmental Planner with CDCR Peter Connelly Jr. no later than February 14th. The California Department of Corrections and Rehabilitation and Ascent Environmental, a Sacramento company who will be preparing the report, held a scoping meeting despite Lassen County Superior Court Judge Nareau’s August 2021 order stating “all parties are restrained from performing any acts to further the closure of CCC pending hearing and further order of the court.”

Project Principal with Ascent Environmental had this to say “CDCR did not originally propose doing an EIR. The EIR is unusual in that closing a facility does not generally have physical environmental impacts. But in looking at some of the issues that could occur, it was determined that urban decay could occur as a result of reduced economic activity in the region — and urban decay is a physical effect, so we will be evaluating that.”

The EIR is scheduled to be completed by fall of this year, several months later than the initial close date for the prison of June 30th. This step in the process is what the City of Susanville has been fighting for in its legal battle with the state as they argue it is required by the California Environmental Quality Act (CEQA) and the California Penal Code.

This Tuesday February 8th, the board of supervisors will review their draft of the 8 page letter addressing each environmental resource to be looked at in the EIR. The meeting will begin at 9am at 707 Nevada Street in Susanville.