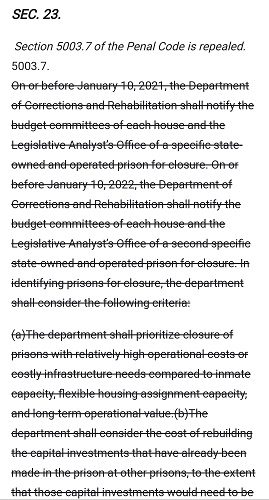 Yesterday marking the announced proposed closure of the California Correctional Center, CCC, Governor Gavin Newsom signed AB200, a trailer bill to the state budget that rewrites the state’s own penal code throwing out criteria outlined for prison closures and declares a new closure date for CCC in the coming year. The 11th-hour state budget approved by the Assembly and Senate reads that the “Department of Corrections and Rehabilitation shall remove all incarcerated persons from, cease operations of, and close, the California correctional center located in the town of Susanville, no later than June 30, 2023.” This penal code has been what the City of Susanville has rested its case on to which the State and CDCR have been unable to prove that it has upheld their own law in addition to not providing documentation and data to justify its decision to close CCC. The law was changed on Monday during which the public was given only a matter of three days to review it before its final approval. In addition to the amended code, the law also strips any local governing body of the ability to challenge the state’s decisions on prison closures and that any action or proceedings against CDCR regarding this shall be brought to the Superior Court of Sacramento. As it remains at the moment CDCR and the state are still held under the injunction ordered by Lassen Superior Court judge Mark Nareau, to continue to cease closure activities until the City of Susanville V. CA and CDCR case is finalized.