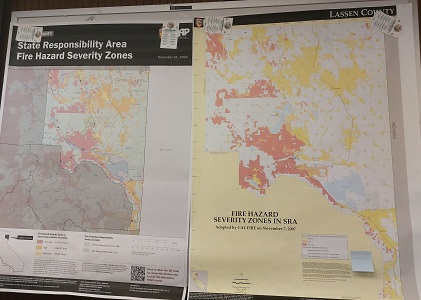 The Lassen supervisors will comment on the state fire marshall’s updated fire hazard severity zone map amid reasons for skepticism.

The map was opened to public comment in early December, following a second update that re-evaluated the likelihood of fire in the state’s responsibility areas; this includes the stretch of county between the Plumas county line and US 395, Eagle Lake and Spaulding areas, Westwood, and Big Valley. Mush of these areas seeing an increase to high severity versus moderate. The supervisors discussed during their January 17th meeting what they would like to have the reason behind the maps update clarified and its intended purpose.

Commenting on the map will be available through February 3rd. CALFIRE wraps up public commenting in the surrounding counties. Plumas just concluded their hearing last evening, and Modoc and Sierra County to have their coming up in the following weeks.