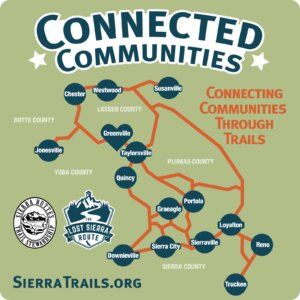 A 600 mile network of trails will soon be connecting the rural towns of Northern California to Reno. The project is the vision of The Connected Communities Project in partnership with the Sierra butte trail Stewardship, US Forest and various community partners. The trail network would be known as the Lost Sierra Route. It will span across the regions 4 counties, Lassen, Plumas, sierra, and Butte and connect 15 towns along the way. The route follows the historic Gold Rush-era mail delivery route and is expected to make its way over  peaks and meadows similar to the Pacific Crest Trail and the John Muir Trail. Yet it will be designed for even the most unskilled hiker, and will allow activities such as horse riding, motorcycle riding, mountain biking, fishing and hunting. The goal of the trail is also to bring economic development to the towns it passes through including Susanville, Westwood, Chester, Quincy, and Sierraville among others. Local input on what each town would like to highlight has been collected throughout the planning phase. The first section of trail is expected to open next year, with the final completed trail debut opening by 2030.