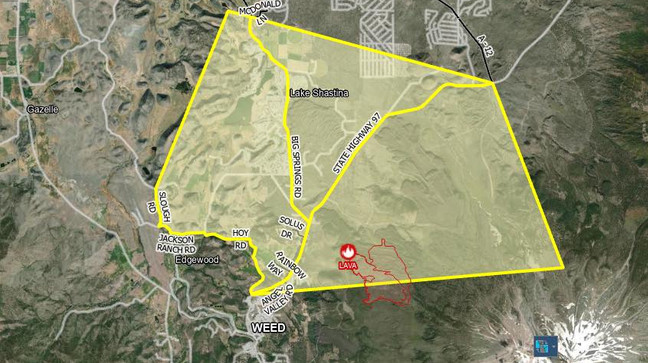 More evacuation orders have been issued as the Lava Fire explodes in size in Siskiyou County.
Shortly after 2:30 p.m., the Siskiyou County Sheriff’s Office issued an additional evacuation order for the Mount Shasta Vista Subdivision, County Road A-12 north and south, and Harry Cash Road from 4 Corners north to Hart Road.
An evacuation warning was upgraded to an evacuation order for the communities of Lake Shastina and Juniper Valley shortly after 1 p.m. Monday.
This comes after the Lava Fire nearly tripled in size overnight to 1,446 acres. Containment dropped to 20% due to gusty winds and dry conditions, according to the Shasta-Trinity National Forest.
Specifically, the evacuation order impacts the north side of Hoy Road north along Highway 97 to County Road A-12. The communities of Lake Shastina and Juniper Valley off Big Springs Road from Highway 97 to McDonald Lane on both the east and west sides of Big Springs Road are impacted as well.
A temporary evacuation point has been set up at Big Springs Elementary School.
Highway 97 is closed from Weed north to Macdoel as crews battle the fast-moving fire.
The National Weather Service issued a red flag warning for parts of Siskiyou County Monday, including the area where the Lava Fire is burning.
“Hot, dry and breezy conditions will allow for new and existing fires to grow rapidly,” NWS Medford wrote in a press release.
The lightning-sparked fire broke out Friday in steep terrain approximately 3.5 miles northeast of Weed.
A large plume of smoke is visible from Interstate 5 and active flames could be seen from the City of Weed Sunday afternoon.

The US Forest Service Aims to Improve Fire Resiliency with Three 1.5M Projects