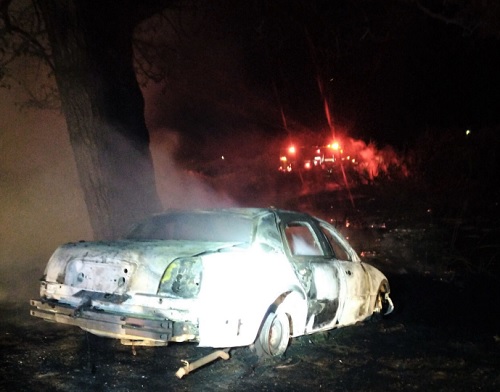 New details emerge on the vehicle pursuit from this morning that began in Susanville and ended in flames in Milford. Susanville Police Department says officers attempted to pull over a Lincoln Continental from Nevada for a simple equipment violation on Ash and First street around 3:20 am this morning. The driver did not respond, and a pursuit began out of city limits down HWY 36 and onto US 395. That’s when two Lassen County Sheriff’s deputies joined the pursuit along with one PD officer.

An attempt to stop the vehicle with a spike strip near Janesville laid out by Susanville CHP failed. The driver continued down US 395 turning onto Lupine lane, where it stopped in front of a tree. Both a driver and passenger fled from the car. Law enforcement set a perimeter and was able to arrest the pair within ten minutes. Upon arrest, the suspect’s vehicle burst into flames and engulfed the tree and surrounding vegetation.

Law enforcement evacuated two nearby homes due to the flames while responding fire departments put out the flames.

The suspects are 28-year-old Daniel McNeill from Fernley, NV, and 24-year-old True Hanely, who has no known address. McNeill had outstanding warrants for injury and tampering with a vehicle out of Lyon County, NV.

Charges brought against McNeill and Hanley include multiple felonies, including setting fire to forest lands on the Plumas, and the Lassen County District Attorney’s office will process both cases.