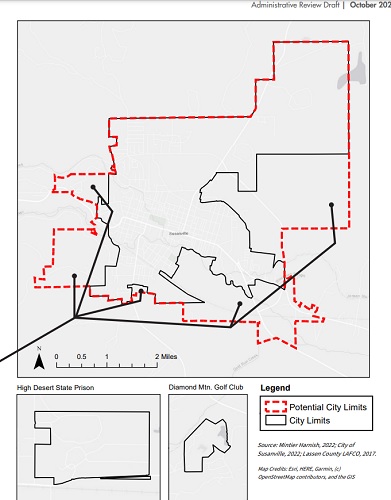 The Susanville city council will look to expand city limits as a Land Use Assessment Report, started early last year, is now complete.

With the use of state road tax funding, a study was conducted involving community and stakeholder input to determine the potential growth scenario of Susanville. Although not binding, the findings from this report can be used to accompany an application for annexation by the City or as a way to begin conversations with the community to determine if future annexations are in your best interest. The newly proposed annexed areas would include Hillcrest and inspiration point to the northwest of current city limits and homes behind the hobo camp area. A 600-acre parcel to the Northeast of town beyond Skyline rd. and Lassen community college and a large area along Richmond road are also included in the expansion.

The impact of incorporating these areas into Susanville would allow for an additional 1400 homes, exclusively located in the Special Planning Area northeast of the city, bringing an estimated 5600 jobs and increasing the employment capacity sevenfold. The report indicates that this substantial increase is directly linked to the fact that a large majority of the land considered for the potential growth area is designated for non-residential, employment-heavy uses, such as commercial, retail, civic/public facilities, and industrial. This would increase the population, not including the incarcerated at High Desert State Prison, by nearly 17,000, with the potential incorporation of the new growth area.

You can hear more about the report during the city council meeting this Wednesday at 5 pm in City Hall.