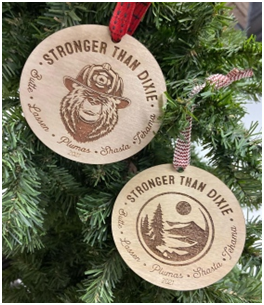 Stronger than Dixie Christmas ornaments were a great success. During the holiday season custom wood ornaments displaying the words stronger than Dixie were sold at local stores to help raise funds for Dixie survivors. 100% of the proceeds went to help those in need. The ornaments were a vision of Josh and Christa Herman of Forever Home and Outdoor to commemorate the Dixie Fire and contribute to the hope for recovery across the Greenville and Canyon Dam communities. The two initially hoped to sell 200 ornaments to donate 2000 dollars to the Wildfire Fund, but ended up making over 400, selling them to locals from all over Lassen and Plumas counties and even as far away as Japan. A total of 4,420 dollars was donated to the wildfire fund to assist those impacted by the historic Dixie Fire.