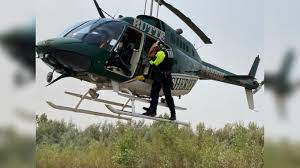 RESCUE: At approximately 7:25 last night, BCSO dispatch received a call from a woman stating her husband went kayaking on the Feather River and was supposed to be finished around 5:45 p.m. and he did not show up to the meeting location.
BCSO deputies responded to the Feather River outlet off Larkin Road and searched for the kayaker, along with California State Parks, and a CHP helicopter was also utilized in the search efforts. After an extensive search of the area, deputies were unable to locate the man.
This morning, at approximately 6:30, a BCSO helicopter pilot located an overturned kayak, approximately 1/8 of a mile upstream from the boat launch. BCSO deputies responded and located the man about a 1/2 mile upstream, but they are unable to reach the man by ground. A BCSO helicopter pilot responded back to the location around 9:00 this morning and safely rescued the man, who was sitting near the water’s edge.
Despite spending the night outside, the man only suffered minor injuries and was taken to the hospital for treatment. We would like to thank all the agencies who responded and assisted us in this search.