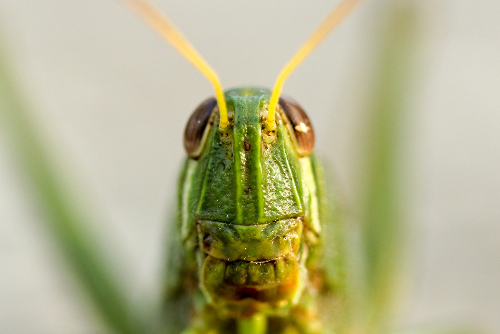 Grasshoppers are plaguing roadways and ranchers from Loyalton through Modoc County. An Ag alert release says the insect population has been exponentially growing due to the drought. Their feeding has had severe impacts on crops and rangelands throughout the region.

A rancher from Modoc County, Herb Jasper, who has a ranch along the Oregon border, told the Devil’s Garden Research and Education UC Extension that his pasture and hay ground was “pretty much mowed down” by the grasshoppers, and he had to purchase supplemental feed. Plumas County cattle rancher and hay grower Susy Pearce said in the AG report that this is her fourth year of dealing with the worsening phenomenon. Thomas Getts, a University of California Cooperative Extension weed ecology and cropping systems advisor in Northern California, says grasshopper activity has increased over the past few years in Lassen, Modoc, Sierra, Plumas, and Siskiyou counties, and many people have lost a lot of forage.

With the impact of the grasshoppers paired with the ongoing supply shortages many producers are faced with paying hefty prices for supplemental feed or reducing their animals. Last year some had to pay upwards of $40,000 worth of additional hay. Pearce estimates damage from grasshoppers has reduced the local hay crop by about a third. Damage by grasshoppers to hay and ground in Modoc County is affecting 400,000 to 500,000 acres, according to Laura Snell, a UCCE livestock and natural resource advisor in Modoc County. Snell has counted 80 to 100 or 200 grasshoppers in a 1-foot square alone. Some relief may be in sight though as USDA announced last year that it would treat 1.6 million acres of national rangeland against grasshoppers with insecticide to reduce their numbers. Snell adds that “If they treat the federal lands, it protects the private lands,” and says that more help may be available through the USDA Noninsured Crop Disaster Assistance Program. She suggested that affected producers keep good records to potentially apply for federal aid. Reach out to your local FSA office for more information.