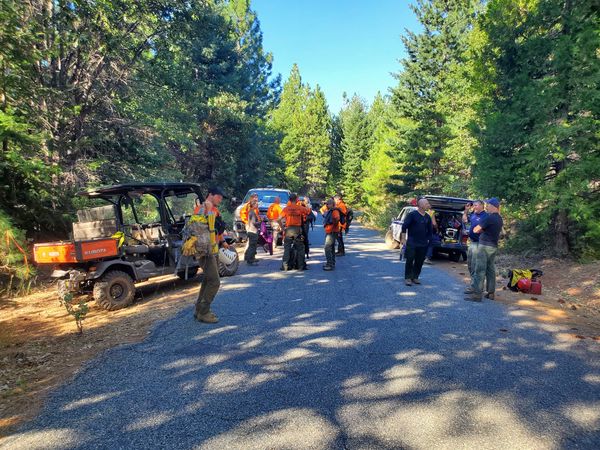 A Clearcreek family is rescued after spending three days stranded near Fiddle Creek in Indian Valley. Two parents and two children hiked in a remote location of Fiddle Creek in Western Sierra County to inspect their claim in the area. The mother began to suffer from heat exhaustion and dehydration and could not hike back out. The family spent the next few days stranded before the father hiked out on the third day to find help. He had to climb a tree in the canyon to reach service where he made a cry out on social media for someone to call 911. Pleading that they are stranded and have not had water or food going for three days. Those cries helped and The Sierra county Sheriff’s office immediately responded and called in CHP Air operations to assist. The tree canopy was too thick for the helicopter to locate the family but was able to find the father on the canyon rim and helped guide deputies down to the mother and child. They were found 2500 feet down the canyon in what the Sierra County sheriff’s Office says is “some of the steepest terrains in western Sierra County.” Deputies helped the mother and additional agencies assisted including Nevada County Sheriff’s Search and Rescue, Downieville Fire, and Forest Service personnel who hiked in to help get the child and infant out. The mother had to be left behind due to her conditions, Search and Rescue, Downieville Fire, and Forest Service personnel remained with her through the night. When morning came and there was enough light for the CHP helicopter, they were able to hoist her out of the canyon to the medevac helicopter. The father shared on social media that the mother suffered from heat stroke she and the children are doing well.