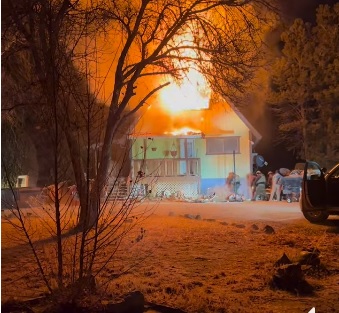 The manhunt for Angelo Atencio, the county jail escapee, and his accomplice girlfriend Ashly Ward, has ended in a fiery stand-off.

Tuesday evening, Humboldt county deputies responded to a home in Winnemucca, Nevada on leads from the Lassen county so that Atencio and Ward may be in the home.

At arrival, deputies saw two people run into the home, and another who lived there confirmed their identities as Atencio and ward.

A special response team with the Humbolt sheriff’s office and a negotiator attempted to extract Atencio and Ward for several hours until Atencio resolved to take Ward as a hostage.

During those long hours, a fire broke out on the home’s top floor. Despite exhaustive negotiations for a peaceful surrender, Atencio would not give up. Deputies attempted to tear gas the home to pull both out, yet it was unsuccessful.

Sheriff Allen with the Humbolt county SO said, Eventually, the top floor of the residence became fully engulfed in flames. Atencio and Ward were forced into the home’s basement, and ward could be heard frantically screaming as the house began burning. The special response team took action and entered the basement while the home was ablaze, rescuing Ward and extracting Atencio as well.

Both have been booked into the Humbolt County detention center, adding additional charges for being fugitives crossing the state line.