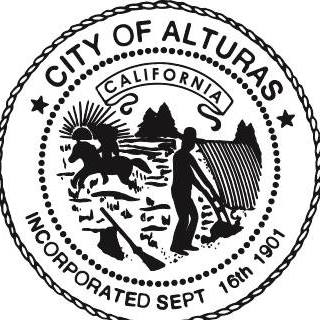 The city of Alturas is warning residents that a Modoc county sheriff or CHP officer may respond to their calls for emergencies as the city police department continues to lose officers.

In a letter to the community, the city stated that over the last year and a half, multiple officers have left, with most choosing to leave the law enforcement field entirely while another decided to go for a new position at a more prominent agency that could pay more.

The council says to increase recruitment efforts, sign-on bonuses have been approved for lateral transfers, and cadets are being sponsored into the academy. While two officers are attending that academy, considerable uncertainty remains on when and whether the department will be fully staffed.

The lack of recruiting law enforcement officers across the state has been challenging, especially in rural areas where competitive wages are hard to match.

In Tehama County, the Sheriff’s Office suspended its daytime patrol services just this November due to severe shortages, mainly within the jail and patrol. Outgoing Sheriff Dave Hencratt says the department has had to “realign…priorities and services to the county, with most of the daytime staff working in the courts, in the jail, or serving civil legal documents.”

Even locally in Susanville, the department has struggled to hire and keep officers. However, to the credit of the city and police chief, the department, this past September, finally reached complete staffing levels with 17 officers.

For now, the city of Alturas says to expect partnering agencies to respond to calls, while a city officer will be on call 24/7 to respond.

See below for the full letter from the City of Alturas. 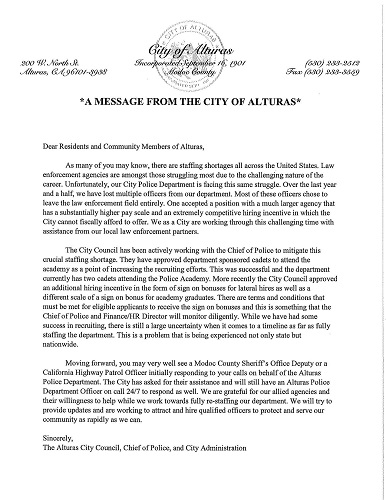