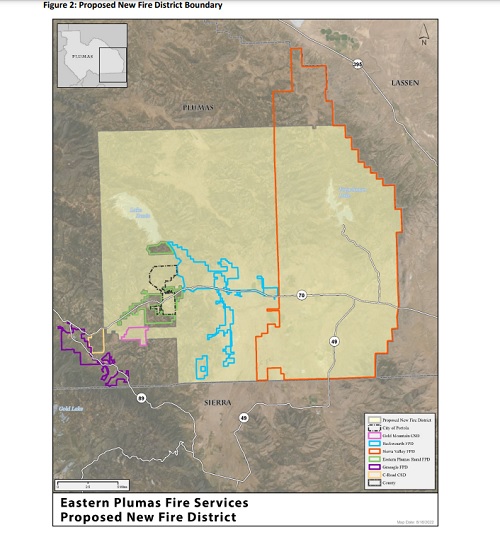 Portola has approved the first steps in creating a new fire district.

At the city of Portola’s October 12th meeting, a draft of a feasibility study completed by the Local Emergency Services Study Group formed in 2020 was reported on and recommended Eastern Plumas County begin to take steps to create a new fire protection district to consolidate services.

The existing eastern Plumas Districts have faced multiple challenges, including aging infrastructure and equipment, lack of staffing, and increased demand. Yet most notably, a lack of funding due to irregular boundaries. Special districts are supported by special and property taxes along with local fundraising. Because the sections are so fractured, with current fire protection districts often responding to calls outside of their jurisdiction, inadequate funding has left the support for services lacking.

Thus forming a new special district would benefit the county in providing reliable services to these areas. The new district would cover 468 square miles governed by a five-member board of directors elected by residing voters. With the formation of the new district, Beckwourth and Sierra Valley Fire would be dissolved and transferred to the new district. The City of Portola would also transfer all responsibility and assets to the new district. Interim City Manager John Kennedy, at the Oct 12th meeting, said this is the most significant advancement he has ever seen in the county towards solving this problem.

The feasibility study draft was approved, and the next step towards creating the new fire protection district will be to apply to the Local Agency Formation Commission.