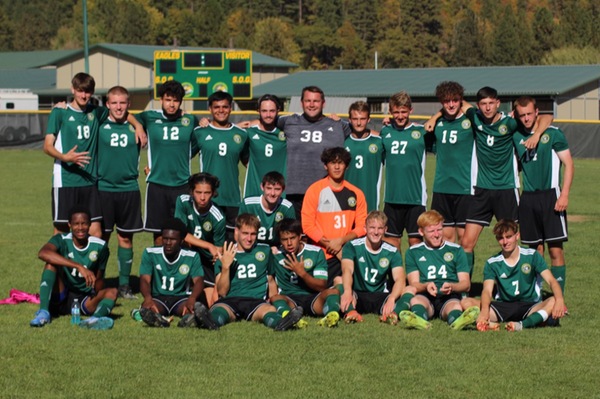 The Feather River College men’s soccer team is currently sitting in 1st place in the Golden Valley Conference with a record of 7-1 and an overall record of 10-7-1. With 2 games left in the regular season, the Golden Eagles take on Butte College today (11/5) at 2 pm. The Golden Eagle program will be honoring their sophomores, Alex Saunders and Denilson Capilla. The final conference game will be on the road against College of the Redwoods in Eureka on 11/9.

Tajio James is leading the Golden Valley Conference in goals (12) and points (30). Tajio is from Barbados and has played an important role in the Golden Eagles offensive attack. Kieran Swanson is leading the coference in assists with 14. Kieran hails from Scotland and has been an important member of the team with his leadership and a strong voice on and off the pitch.

The Golden Eagle squad has continued to grow and develop throughout the season. They feel like they are finding their groove as they enter the final games of the regular season.