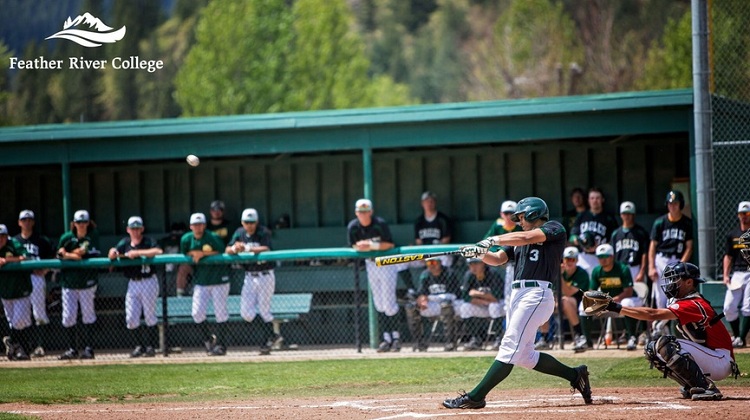 OROVILLE–With the chance to clinch another Golden Valley Conference title against the team closest to them in the standings, Feather River College did so on Friday afternoon with little to no drama during a 8-0 victory over Butte College.

The Golden Eagles secured their 13th title in the last 16 years with three league games yet to play. They improved to 30-7 on the season and to 21-1 in the GVC. Butte is now 16-6 in conference play and 24-13 overall. The two squads will play again tomorrow (Saturday) at 11 a.m. in Quincy.

For head coach Terry Baumgartner, who has been the program leader for 12 of those titles and was an assistant for the other, this title was just as special as any of them.

“Each and every one of our conference titles are special in their own way,” the veteran coach said after the game, still soaking wet after enduring a water dousing from his team. “It is great to see our players this year come together for the common goal of our team winning a GVC championship. I am very proud of this team and these kids.”

Baumgarter’s team played a nearly perfect game in rolling to the triumph against a good team. They played errorless baseball, scored eight runs, had ten hits and held the Roadrunners to just six hits and no runs.

The Golden Eagles scored twice in the third, fifth, sixth and eighth innings. Cooper Kitrel drove in two runs in the third with a single, another with a double in the sixth and added a fourth RBI in the seventh with a base knock. He finished 3-for-5 to lead the offense, but he had plenty of help. The top three hitters in the FRC order combined to go 8-for-14, with lead-off hitter Garret Damico lacing three of those hits, including a double and a triple. Jerry Thomas, the No. 3 hitter, was 2-for-4.

FRC pitching was top notch as well. Dylan Cabral got the start and went the first five innings, allowing just four hits, two walks and he fanned three. He would be credited with the win to improve to 5-3 on the season. Dakota Todd pitched three shutout innings and Jake Christianson closed out the clincher with a 1-2-3 ninth and the dog pile soon began just behind him near third base.

After taking on Butte again on Saturday, the Golden Eagles will travel to Lassen College next Wednesday (2 pm) before hosting Lassen on Thursday (April 28) at 2 pm. The final regular season home game will also be Sophomore Day at The Nest.