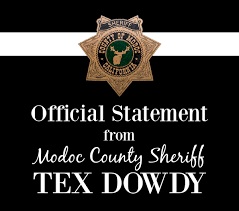 The announcement came after the first known case was reported on Oct. 15. Since then, a total of 15 inmates have tested positive, according to the Modoc County Sheriff’s Office.

With an average population of 30 inmates, the outbreak accounted for around half of the jail’s total population.

The majority of inmate cases were mild with symptoms ranging from headaches to runny noses and body aches, according to officials.

The sheriff’s office says that the jail went 579 days without a known case of COVID-19.

“We think we are the last jail facility in the state to get a positive case,” said Sheriff Tex Dowdy. “We have booked almost one thousand people in and out of the jail in that time. The jail staff should get full credit for this.”

While no inmates tested positive until October, an outbreak infected a majority of the jail’s staff back in May.

Modoc County was the last county to report a positive case of COVID-19 in California.

“Modoc County stayed open as most businesses are essential, or they couldn’t survive the rural economy,” Sheriff Dowdy wrote before turning to the topic of vaccinations.

“We were recently asked how many of our staff members are vaccinated. I don’t know. This isn’t something we have ever asked our staff and we don’t plan to. That is their private medical information. We trust that our staff will take the necessary precautions they feel they need to protect themselves.”

Dowdy adds that the sheriff’s office is providing staff with any protective gear that is requested.