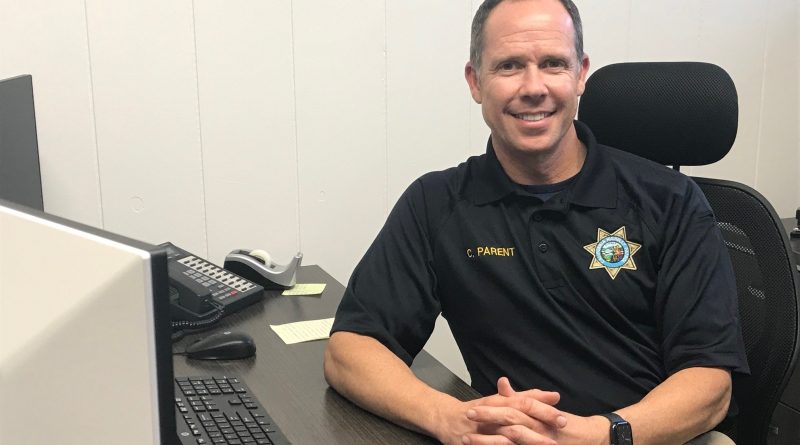 Lt. Commander Chris Parent,  Nov. 1 —his first official day on the job as the new Quincy area CHP commander. He has been serving as the interim commander since Sept. 1 when he took over for Lt. Erik Egide, who is now the commander in Truckee.

Parent, who spent much of his career as a public information officer. The 47-year-old graduated from the CHP Academy in 1999 and was on the road in Southern California, about half of the time in Oceanside. From 2010 to 2018 he worked on rebuilding that area’s community outreach program.

“I’m passionate about community and community outreach,” he said, something that he’s hoping that now can get back to normal post COVID. He’s more of a familiar face in Eastern Plumas where he worked and lives, and he hopes to duplicate that presence in the rest of the command post area. “There’s a correlation between having a good relationship with the community and keeping it safe,” he said.

The CHP often assists on calls when a deputy isn’t available. “We are always happy to provide backup,” he said. Both entities are short staffed. Parent explained that the CHP Academy, though open now, had to shut down during COVID initially, resulting in a lack of new officers to offset retirements and attrition.

And this shortage comes at a time when traffic fatalities nationwide are at the highest levels they have been in 15 years. Parent attributes that to higher speeds, weather and DUIs, which he said have risen exponentially in the past five or six months.

He thinks his officers do a good job of patrolling the roads while having to interact with people that they know. “Everybody knows everybody here,” he said, unlike Southern California where there is very “little likelihood that you will arrest someone that you know.”

During his time in Oceanside, Parent was often the face of the CHP and interacted with the media covering accidents and other incidents — sometimes these events drew the national media — such as when plane landed on a vehicle. He enjoyed that work and said, “I absolutely loved my job.”

Was it difficult to leave? “The small-town dynamic was a little different,” Parent said of the adjustment, but he wanted to promote within the CHP and that meant moving. When he made the decision to promote to sergeant, he had 13 options, and one of them was Quincy. He initially worked out of the Quincy office for six months before taking over the post in Portola. When asked how his family adjusted, he said, “My wife is so supportive; she plugs in wherever we go.”
Advertisement

And he reiterated that he wants to plug into the community and welcomes people to stop him if they see him around. He has plans to join Rotary and the Elks so he can build more relationships, because as he stated earlier, a good relationship will help keep the community safe.