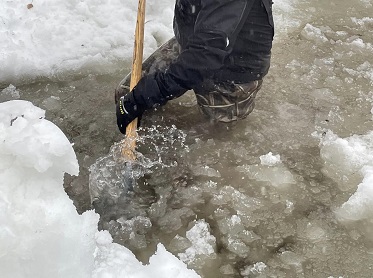 The New Years’ weekend storm ushered in the year with road closures, localized flooding, and heavy snowfall in some higher-elevation areas (we’ll have some of those rain and snow totals). Local emergency response spent days helping those who were experiencing flooding at their homes. Specifically, in Clear Creek, the Lassen County Sheriff’s Office, Cal Fire, CDCR Camp Crews, Clear Creek, Westwood Fire, the County Road Department, and O.E.S. cleared culverts and removed ice from the frigid creek, and placed sandbags. The Susanville Fire department, with the help of CDCR camp crews, set up a sandbag-filling site at the station leading up to the storm to help those who were threatened by the rising waters of the Susan Rive that approached the flood stage.

The heavy rainfall and snow Friday into the weekend also shut down highway 70 in Plumas county and Highway 49 in Sierra county due to debris and stranded vehicles that blocked the roadway. Both roads have since re-opened though the California Highway Patrol says to use caution through these roadways: “The hillside is far from settled and more water is on the move.”
Reminder Gold Lake Highway is closed for the winter season to vehicles. S.A.R. helped the subjects on Gold Lake Highway recover their cars and drive out. There were no road closure signs, so S.A.R. placed closure signs.

Overall the storm, From NYE to New years day in Plumas county, produced between a foot to 15 inches of snow below 7000ft, surprise valley below 6000ft received up to 2 inches, and lower elevation rain totals reached upwards of 3 inches.

Be prepared for another round of wintery storms as the national weather service says a fast-moving storm impacts N.E. California later today, followed by a bigger storm midweek.