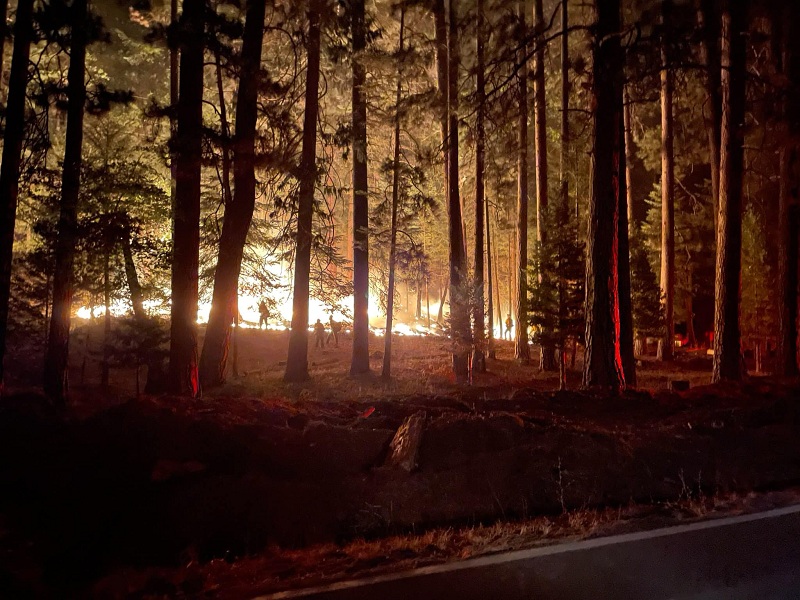 Forest Service News Release
Dixie Fire Update for Thursday, August 26, 2021
747,091 Acres 45% Containment 4,889 Total Personnel
Lassen and Plumas National Forests, August 26, 2021 — Yesterday and last night were actively
engaged in the Taylorsville and Genesee Valley areas. Overnight, hotshot crews continued to work the fire
down off Mt. Jura to the valley bottom to secure Taylorsville. They continue to aggressively mop up heavy
materials to reduce spotting. No spots have occurred, and today resources will focus on holding this line. The
fire on Peel Ridge continues back down into Genesee Valley, and resources have been involved in structure
protection in the Genesee Valley near Ward Creek and Little Grizzly Creek and will continue this work today.
Structure preparation was completed in the Five Bears/Ward Creek area. On the west side of the Grizzly spot,
crews supported by aircraft have been successful tying the line into a rock scree field and moderating westward
progression. Crews continue to try to hold the control line on top of Grizzly Ridge. Significant progress was
made on the contingency lines down Grizzly Ridge to the southeast that will tie into the Walker Fire scar. This
line will protect communities to the south, such as Greenhorn and Quincy. Today equipment will also be
moving into the area north of Davis Lake to work on contingency line.
Additional work was also carried out in Peters Creek to remove a pocket of unburned fuel to secure the line
north of Taylorsville. Crews patrolled and mopped up all through Indian Valley. In the Dyer Mountain area,
crews continue to work at removing the concentration of heat near the line in Second Water Trough Creek.
Heavy equipment and crews are working to secure the spot fire near Antelope Lake. Patrol and mop-up
continue to occur throughout the East Zone to ensure that no hot spots rekindle and threaten the line.
Winds will be lighter today, and direction of flow primarily determined by local terrain. The atmosphere has
more stability today, and the inversion will lift later than it did yesterday. These factors will moderate fire
behavior today, at least until late afternoon.
Dixie Fire West Zone: Winds calmed after sunset but the fire remained active well into the night. Spotting
and torching was limited to areas in and around Lassen Park with fire burning in a number of remote areas with
limited access and steep and rugged terrain. Temperatures today are expected to increase with decreasing winds
from the north and northwest.
Certain evacuation orders have been reduced to warnings and certain warnings have been lifted allowing some
residents to return to their homes and businesses.Returning residents are strongly encouraged to stay vigilant
with regard to current fire conditions. Residents may see smoke coming from trees and stumps for days following
their return. Residents are encouraged to call 911 if they are concerned about any active flames near their homes
or businesses rather than attempting to deal with such flames themselves.
Northern California has experienced large fire activity and will likely experience an extended fire season. Fires
burning in northern California are exhibiting extreme fire growth based on critical fuel conditions. The
prioritization of resources is always based on life, property, and natural resources. Under these drought
conditions, wildfires are burning rapidly with extreme severity and have traveled up to 8 miles in a single day.
Fuel conditions are much worse than previous years and along with wind is causing much greater fire spread.
Firefighters are experiencing conditions never seen before, such as increased spread rates, spotting and active
nighttime burning. We coordinate very closely with the US Forest Service and CalOES for our local and out of
state partners, to ensure resource availability.
Follow QR Code or link below for contacts and additional information
LINKS – InciWeb the Incident Information System (nwcg.gov)
###
USDA is an equal opportunity provider, employer, and lender.