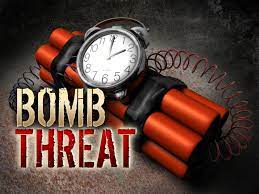 On Monday, someone made a bomb threat to the same prison, Department of Corrections and Rehabilitation spokeswoman Dana Simas confirmed in the email.

“It has not yet been determined if the two incidents are related,” Simas said. Simas confirmed Tuesday that there was an “incident involving two off-duty, non-peace officer” employees at the Lassen County institution. The victim survived the incident.

Simas said the corrections department coordinated with the Reno Police Department to respond to the bomb threat.

They found “no evidence of bombs and don’t believe the institution is in any danger,” Simas said in the email.

A prison employee who requested anonymity for fear of employment retaliation said the bomb threat was made early Monday morning and the prison was on lockdown until around 4 p.m.

The employee said there was a police presence Sunday at Hunter’s home.

Threat Made to LHS Puts Students and Staff on Hard Lockdown