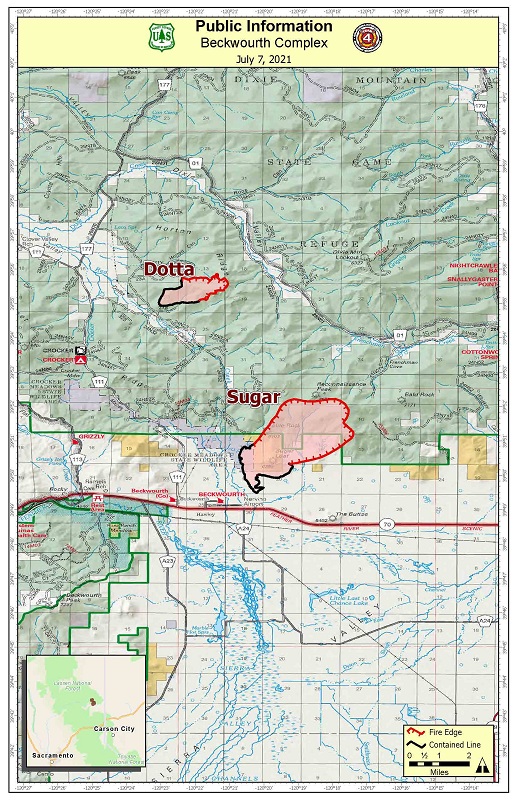 Wednesday, July 7, 2021
Beckwourth Complex Morning Update
Beckwourth Complex Fires Acres % Contained Total Acres Total Personnel
Dotta 670 40%
3,035
270*
*(Additional resources
Sugar 2,365 28% on order)
*Fire Resources: 6 crews, 1 helicopter, 14 engines, 2 bulldozers, 3 water tenders
Current Situation: Late yesterday afternoon, the Sugar Fire, that is part of the Beckwourth Complex,
crossed outside of its current containment line. The fire was pushed across the containment line as a
result of 20-35 mph gusty, southwest winds. The fire grew approximately 1,875 acres overnight and is
burning in a northeast direction towards Reconnaissance Peak. Air tankers, flying out of McClellan Air
Tanker Base dropped multiple loads of retardant to slow the fire’s spread, along with helicopters
dropping water, giving firefighters on the ground an opportunity to safely attack the spreading fire.
Firefighters that worked yesterday’s day shift staffed the Sugar fire last night. Those resources included
hand crews, dozers, engines and water tenders. A structure protection group comprised of local fire
departments and Cal Fire engines provided structure protection to residences around the Maddalena
area all evening. No structures have been damaged or impacted.
Additional resources of firefighters, helicopters, engine strike teams, and dozers have been ordered
and will be arriving throughout the day to respond aggressively, hoping to take advantage of predicted
minimal wind and utilization of aircraft to support ground resources. Expect to see a steady stream of
air tankers and helicopters flying retardant and water tomorrow. Some crews and other equipment
from the Dotta Fire will be moved to support the Sugar Fire. Fuels within the interior of the Dotta Fire
will continue smoldering and burning themselves out.
Evacuations: A Mandatory Evacuation has been ordered by the Plumas County Sherriff’s Office due to
a flare up within the Beckwourth Complex. Residents from Beckwourth Genesee Road to Harrison
Ranch Road need to leave the area. An evacuation center has been set up at Portola Baptist Church at
171 Gulling Street in Portola. In addition, an Evacuation Advisory is back in effect both Dixie Valley and
Frenchman Cove areas.
Weather: Sunny skies will prevail with temperatures remaining a few degrees above normal. Little
change in relative humidity is expected with poor to moderate recovery to start the day followed by
USDA is an equal opportunity provider, employer, and lender
very low afternoon humidity. Winds will be light and terrain influenced through the morning,
increasing and becoming gusty through the afternoon.
Air Quality: Smoke, including smoke from neighboring fires, will continue to become more prominent
each day due to southerly winds. Refer to https://www.airnow.gov for more information on smoke
conditions in your area.
Closures: There are no current highway or Plumas National Forest closures in effect.
Fire Restrictions: Current fire restrictions remain in effect for the Plumas National Forest. For more
information visit https://www.fs.usda.gov/detail/plumas/home/?cid=stelprdb5374320
Preventing Wildfires: We are asking everyone to remain vigilant this wildfire season. Please know and
follow current fire restrictions. Report any suspected violations to local authorities. If you see
something, say something. A single phone call to 9-1-1 can be the difference in preventing a
catastrophic wildfire.