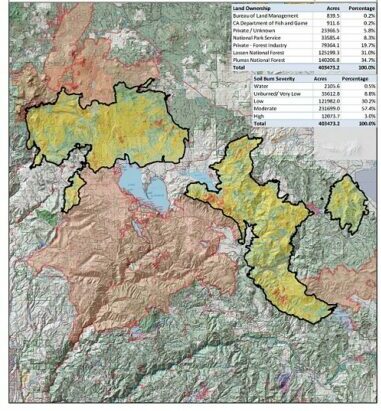 After nearly two years since the Dixie Fire started, Lassen and Plumas counties settled their claims with PG&E.

The two counties and eight others have collectively settled a 24 million dollar deal for the public and natural resource damages caused by the Dixie Fire that started July 13th of 2021, burned nearly a million acres across five counties, and destroyed 1300 homes and businesses. Along with the five counties affected by the fire, the City o Susanville, Plumas District hospital, Chester public utility district, the Honey Lake Valley Rec Authority, and Herlong Public Utility District were included in that settlement.

City Administrator Dan Newton shared with the city council that funds could begin to arrive within the month at 700,000 dollars. Each entity will receive an amount equal to the relative damages suffered to roads, and natural resources, as well as the cost of staff and labor time, lost revenue, increased expenses, and funds for FEMA and CalOES assistance.