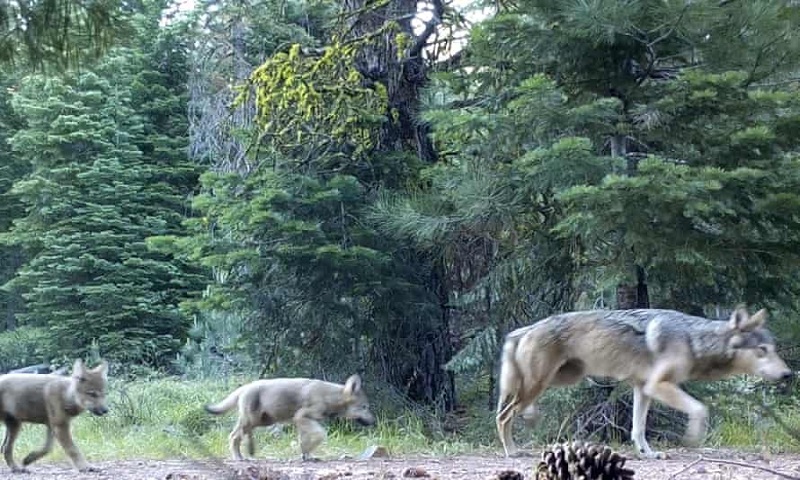 The brand-new wolf pack that recently settled in California’s Siskiyou County has had their first litter of 7 pups, according to the California Department of Fish and Wildlife’s wolf specialist Kent Laudon. The Whaleback Pack now sits at 9 wolves after the male gray wolf, dubbed OR-85, mated with a female in rural Northern California. They now sit as the second known full wolf pack in California.

It was a major milestone for wildlife conservationists in California when OR-85 crossed over the Oregon border and settled in Siskiyou County in November 2020. In early 2021, the female was spotted with OR-85, alluding that the two could mate and create a full wolf pack. It’s currently unclear where the female wolf came from. The wolf could have come down from Oregon or could be from the Lassen Pack, California’s wolf pack in Lassen County.

The announcement of the new pups was made on September 8 during a presentation on California wolves, which Laudon revealed this brand new video of the full pack running through the wilderness:

While this is good news for those lobbying for wolves reintroduction in the California wilderness, it’s bad news for ranchers in the region. For years, the wolves crossing in the state have feasted on livestock, a growing financial burden and physical danger for ranchers. As of January 2021, wolves are no longer federally protected, but they are listed as endangered species in the state. In California, wolf killers could face years in prison.

Following decades of hunting wolves in the 1800’s, the species had disappeared from the state altogether. After wolf reintroduction into Idaho’s Yellowstone National Park in the 1990’s, wolves have slowly moved across nearby states, including Oregon and California.

The only other known full wolf pack in California, the Lassen Pack, lives a controversial life in rural Lassen County. With brand-new litters of pups in recent years, the Lassen Pack has grown to 10 current members. Some locals furiously debate their right to live in the region, with some incidents of killing grazing cattle on nearby ranches in the years since their settlement. Wildlife officials revealed they believe most of the pack was able to survive the nearby Dixie Fire.

The only other known pack in California was the Shasta Pack, which mysteriously disappeared in Siskiyou County in 2018. There are currently multiple investigations in NorCal pertaining to the suspicious deaths of wolves in the area.