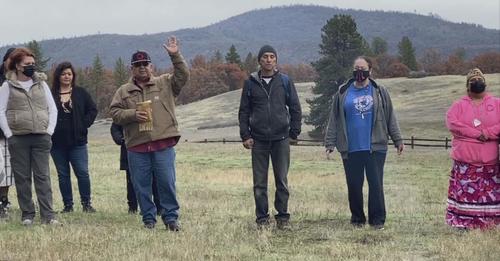 The Pit River tribe has gratefully received back some of its ancestral land along Hat Creek in eastern Shasta County.

Tribal members held a ceremony on Friday, November 5, on the 756 acres given to the Pit River tribe from PG&E as part of a court-ordered bankruptcy settlement. It has deep meaning to tribal members.

Members of the Pit River tribe held a ceremony to mark the return of its ancestral land along Hat Creek in eastern Shasta County on Friday, November 5, 2021.

The land is now owned by the tribe, but the Shasta Land Trust has an easement to ensure it will remain undeveloped forever, and open for public access.

Land that was once used for cattle grazing has had great significance for generations of the bands that make up the Pit River Tribe.

“These areas are our burial sites: they’re our places where our ancestors have come from,” explained Pit River Environmental Director, Gregory Wolfin. “And so, we want to try and protect and preserve them because, otherwise, it would’ve turned to grazing.”

This is the first of four parcels—a total of more than 5,000 acres—that will be returned to the tribe within the next couple of years.

CalTrans Announced SR-70 has reopened in the Feather River Canyon