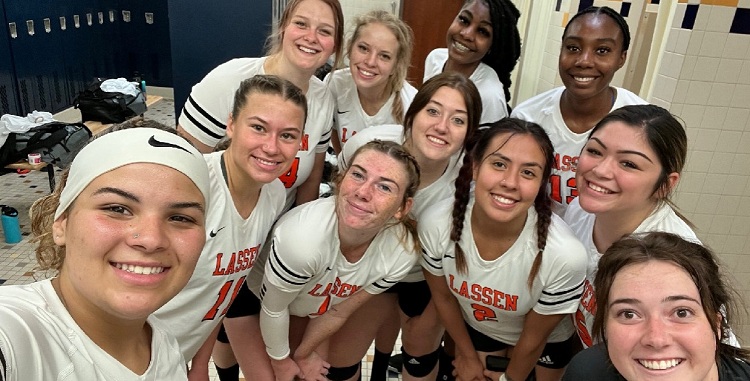 Sitting at 6-2 and their best start since 2014 when they went 19-7, the Lassen College volleyball team is already creating some chatter throughout the CCCAA. Head Coach Amy Morris took the Lady Cougs to their best season in the school’s history, reaching the playoffs. She left the program the following year but has returned nearly a decade later to pick up where she left off.

This week they are ranked “Best of the Rest” in the CCCAA Top 25 State Volleyball rankings.  After winning only one game last season, Morris, her returning players and slew of talented newcomers are focused on maintaining this season’s early momentum and getting better with every game.

“Once we got the first win this year, you could see the relief on some of the players faces,” said Morris. “Once we got the second win you could see the whole group change and they changed because we now had “buy-in”. They could see that the things we were doing were working and resulting in success. The talk from then on was, now every practice we have will be harder and more intense moving forward because that is what it will require to keep winning and they have shown up every day.”

The team has already logged 1,500 miles on the road traveling throughout northern and central California in their preseason schedule. They will log another 2,000 miles before returning to campus for their first home game on Oct. 19 versus College of the Siskiyous.

“Coming into season my goal mentally was to get the program back to .500,” said Morris. “We did not set goals at the beginning of the season because everyone and everything was so new. We spent a ton of time more focused on how we train, how we communicate and how we lead all things that have helped us and will continue to help us be successful.

Lassen College volleyball fans will be treated to a top-notch program. Morris is bringing back her style of coaching and expertise that she learned from her days as a D-1 athlete at Tennessee and professional athlete overseas that has only strengthened since her first stint as head coach back in 2013-14.

“I always treat my college athletes like the adults they are,” said Morris. “I have played at a variety of levels, and have coached at a variety of levels all of which have shaped the way that I communicate with my players. I do not have a certain way that I treat teams and players, because each year is different and will require different responses in order to find the right groove. I did get very lucky with this this being the first group I have had coming back, because we are finding a great vibe, can work hard together and also laugh together at the end of the day.”

The Cougs face Los Angeles Mission College on Sept. 16-17 in Sylmar and head to the Marysville (Yuba) and Sacramento (Cosumnes) to close out their preseason. They will open the 2022 Golden Valley Conference season at Feather River College, currently the number one team in the state, on October 5.