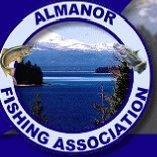 12/25/22
Lake level is unchanged since last week, sitting at 4477.85, which is within a tenth of an inch of last year on the same date. The extremely cold weather over the past two weeks has resulted in minimal snow melt. We still have feet of snow on the ground at lake level and the mountains surrounding Almanor are covered in snow. We are expecting a series of warmer storms beginning Monday afternoon with rain at lake level, our ten day forecast calls for precipitation on eight of the next ten days. High winds early in the week will make fishing difficult at best. Rain, snow, and wind will cause delays traveling to and from Plumas County, carry chains and be prepared for slides and delays on 70 and 32.
I fished Wednesday, Thursday and Friday last week, water temperature was thirty-four ½ degrees on Wednesday warming to thirty-six on Friday. We caught fish around the dam and along the East Shore early in the morning slow trolling crawlers and plastics, the fish were on the surface early dropping in depth as the sun came up. Friends caught a mix of browns & bows pulling Rapalas in the same area on Thursday. Shore fishermen in Geritol Cove were catching a nice grade of fish as well. You will need to watch the weather for at least the next two weeks, fish will remain around the dam and shore fishing should continue to be productive in the coves around the dam.
Canyon Dam is currently open, please call the USFS to ensure it is available during inclement weather as the ramp and parking lot get plowed as time allows during storms.
I would like to wish you all a Merry Christmas and Happy New Year and thank you for supporting the Almanor Fishing Association and the Lake Almanor Community!