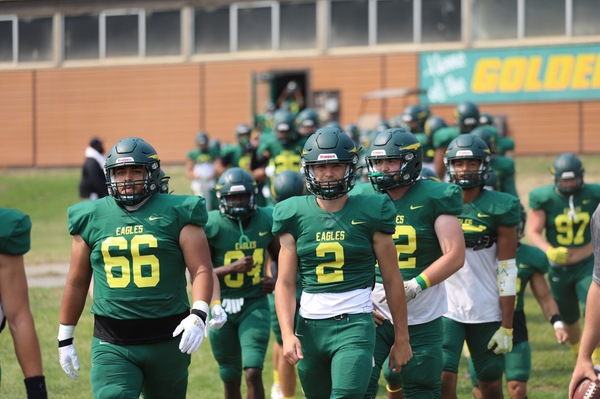 Quincy – The Feather River College football team won its home opener over Cabrillo College on Saturday by a 70-14 score. After an air quality delay, which pushed back kick off for almost two hours, the Golden Eagles scored on eight possessions in the first half and cruised to victory.

Sophomore Quarterback Jared Taylor completed 10-of-13 passes for 106 yards and two touchdowns. His touchdown tosses were good for 25 and 14 yards, to Dalton Flowers and Sam Marshall. On the ground, he rushed threes time for 69 yards, including a 63 yard touchdown run.

The ground attack was explosive for a second consecutive week as the team rushed for 463 yards on 48 attempts, for an average of 9.6 yards per rush. Sophomore Quarterback Daeden Taylor rushed for 133 yards on 7 attempts, including a touchdown rush of 78 yards. Sophomore Tanner Hall rushed for 126 yards on 10 attempts. As a team, the Golden Eagles had 7 rushing touchdowns.