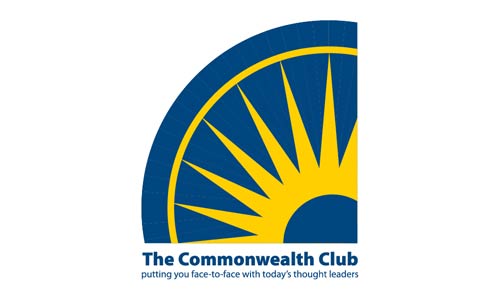 In early 1903, a small group of civic leaders and thinkers joined together to create an organization that would work for the common good. Dedicated to studying and discussing problems and their solutions, The Commonwealth Club of California was founded on February 3, 1903, by San Francisco Chronicle agriculture editor Edward F. Adams, then in his late 60s. He remained active in the Club until his death 26 years later.

Adams' concept of a public service club, where intelligent people with varying perspectives could debate issues of public concern, was shared by a growing number of educators, business people, government officials, scholars and community leaders, and the Club soon became established as an integral part of San Francisco and a major influence throughout California.

The hallmark of the early Commonwealth Club was studies on a variety of topics, some reflecting a social concern (child labor in 1906, Indian rights in 1909, air pollution in 1913) and others that led to social change and state legislation (civil service processes in 1904, California banking laws in 1908, selection of jurors in 1920 and public defender's offices in 1932). Returning to its early roots, in 2005 the Club launched a major project on California governance reform, Voices of Reform, which later became the independent organization California Forward. And in 2007, the Club launched Climate One, an ongoing dialogue on energy and the environment.

Throughout its history, the Club has benefited from a steady stream of national and international political and social notables who have appeared before the organization, beginning with Theodore Roosevelt in 1911.

In 1924, the advent of radio presented new opportunities to take The Commonwealth Club outside the Bay Area with a statewide radio broadcast. In the 1950s, the radio show broadened beyond California, and now is carried on more than 230 radio stations across the country. It is the oldest continuing radio program in the country.

Select Club programs are also broadcast on television by C-SPAN and some Northern California stations, and a weekly Club program airs on the Bay Area television stations KTLN/KAXT. Hundreds of Club videos are available on Facebook and YouTube, and thousands of programs are available as podcasts on Apple Podcasts, Google Podcasts, Spotify and elsewheree. The Club's magazine, The Commonwealth, is distributed to members.

As early as 1979, the Club offered programs in the South Bay, but it expanded its South Bay programming significantly in 1997. The Commonwealth Club/Silicon Valley is now actively engaged in developing programs that address issues pertinent to the vibrant Silicon Valley community. The Commonwealth Club also offers regular programs in other regions of the Bay Area as well, and these regional programs—in Marin and Sonoma Counties and in Lafayette in the East Bay—are now an important part of the Club's programming efforts.