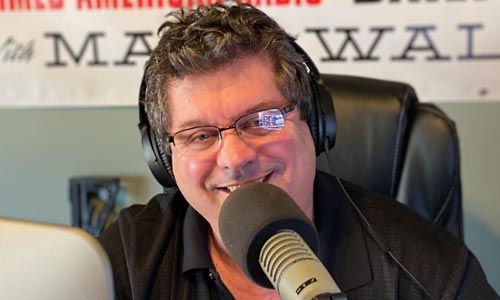 Mark Walters is the founder of the Armed American Radio broadcasts and the CEO of the company that brings it to America, CCW Broadcast Media LLC. Born over a dinner conversation with Timothy J. Schmidt, founder and CEO of Delta Defense, LLC and Concealed Carry Magazine after the 2009 SHOT Show in Orlando, Florida, the program would take to the airwaves on April 26th, 2009 as a one hour show heard only in the Atlanta metro market. The rest, as they say, is history. Armed American Radio would go on to become the fastest-growing pro-gun rights radio broadcast in American Broadcasting history celebrating its 10th year on air in 2019.

Tiring of the snow and cities of the Northeast after a two-year stint in the city of Philadelphia and longing to get back to the South, Mark would settle in Tampa, Florida in early 1992. Sick of the corporate world and with entrepreneurial blood flowing, he abandoned the motor carriers he sold for and started his own consulting and truckload brokerage agency in 1995 running it until 2007. “Running that business successfully for over a decade, I was tired of the trucking and transportation industry. It just wasn’t in my blood for a “forever” thing and I knew it. While I was in my late thirties and loved the company I started and the people who worked for me and with me, I knew there was much more in me than arranging and delivering freight for the rest of my life. I had always loved writing and anyone you ask that has known me for a while will tell you I can talk forever. I had always been a gun owner since the early days of my career when I worked in some pretty nasty places of some pretty big cities such as Philadelphia, a couple of sales blitzes in places like Camden, NJ, and some of the southern cities in North Carolina. While they’re all pretty cool places, the freight business kinda takes you to the underbelly, industrial areas I wouldn’t normally visit unless I had to, so I carried a small gun, unbeknownst to anyone I worked with. That would only increase as I moved to Florida, graduated to my CCW permit, training, and bigger and better guns! I had no idea that my budding awareness of my own personal safety would bring my love of writing and my ability to run my mouth together in this way.”

Now married with a baby girl, something happened that would tie it all together. In November of 2002 just two weeks after the birth of his daughter, Mark found himself the secondary intended victim of an apparent carjacking attempt while stopped at a traffic light on E. Fletcher Ave. in the Suitcase City section of Tampa, FL on his way to work. Luckily on that November morning, he was carrying his Glock 36, .45 caliber handgun. When the criminals, both of them, found themselves unable to get into the vehicle just off of his left bumper, they turned their attention towards him.

Watching the frightening events unfold in front of him and happening at a frantic pace, he leveled his .45 at the criminal standing just feet away from him and approaching his vehicle. When confronted with a gun pointed directly at his chest and without Mark having to squeeze the trigger, the closest attacker waved off his partner and both men retreated to their vehicle and fled the scene. That scary experience would later become the first column of a 12-year stint writing a regular piece for Concealed Carry Magazine (CCM) and would later become the first chapter in his first book, Lessons from Armed America, co-written with then CCM Editor, Kathy Jackson. “I guess in a weird and twisted way, I owe my career to two scumbags who would have probably killed me had I not had the means to stop them. It was my writing that would bring me to CCM and to that 2009 SHOT Show and the discussion that would subsequently lead to the founding of Armed American Radio. Funny how the universe works.” Prior to drawing his gun in self-defense, his letters and opinions defending gun rights and other conservative issues appeared many times in the Tampa Tribune over the years, several times countering the anti-gun views of a local anti-gun crusader. Mark would later go on to co-author three critically acclaimed books. His first, Lessons from Armed America, co-written with Kathy Jackson (foreword by Massad Ayoob), was released in October 2009 by Whitefeather Press to great reviews and highlights the stories of those who found themselves the victims of violent crime and either used a gun or wished they had one when they needed it most, including his own story. Written in groundbreaking format, Mark told the story of the frightening events of true crime which his co-author followed with critical analysis. His second book, Lessons from Unarmed America written in the same format with famed trainer and self-defense expert Rob Pincus includes a foreword by rock star and activist Ted Nugent. Now, his third work, Grilling While Armed-The Top 20 Recipes: How to get off the gas and become your neighborhood BBQ pit boss in one day, is released to great reviews. Co-written with noted firearm expert and long-time AAR contributor, George “The Mad Ogre” Hill, GWA has become a smashing success. Many years in the works, Mark considers it his best project to date! Both national radio shows have broken new ground in the world of talk radio by bringing significant exposure to the plights of Americans’ fight for their right to self-defense. Interviewing some of the nation's biggest newsmakers and activists as well as hard-hitting political commentary on the day’s current firearm news, both the weekend and weekday shows are one-of-a-kind. The list of folks Mark speaks with includes rock stars, country singers, radio personalities, national and local politicians, TV stars, internationally recognized trainers, weapons experts, criminal psychologists, television hosts, authors, attorneys, award-winning journalists, real people who have used a firearm to defend themselves against the violent attack and regular, ordinary folks who make a difference. Mark was one of the headline speakers at the Second Amendment March in Washington, DC on April 19th, 2010 joining other guests such as Suzanna Hupp, Sheriff Mack, Dick Heller, Mancow, and others who proudly proclaimed the birthright of every American to keep and bear arms. He has appeared countless times as a guest on local and national radio shows including the Mike Gallagher Show, Bill Bennet’s Morning in America, The Michael Medved Show, Dennis Prager, Hugh Hewitt, Lars Larson, The Bill Cunningham Show, The Janet Mefford Show and many, many others including co-hosting the former nationally syndicated G. Gordon Liddy program. His recent television appearances defending gun rights include NBC New York News, One America News with Graham Ledger, among others. In addition, Mark was a guest on Fox Business Channel’s The Stossel Show, with John Stossel to discuss the topic of More Guns, Less Crime and appeared weekly as a guest on the popular live web TV program, American Trigger Sports Network with host James Towle as well as the Stop the Threat television series. His international appearances include BBC International radio networks and television, BBC America, RT Television, among others. Mark's interviews on AAR over the years have been mentioned in every major newspaper in America including USA Today, Washington Post, LA Times, Boston Herald, NY Post, Rolling Stone, Variety, Miami Herald, every major TV, and cable network. In 2015, Mark was Honored by the Gun Rights Policy Conference as their “Gun Rights Defender of the Year” award recipient followed in 2017 as the “Distinguished Service Award” recipient. Mark is the East Coast Media spokesperson for the Second Amendment Foundation and a member of the Board of Directors of the Citizens Committee for the Right to Keep and Bear Arms. He is an NRA Certified Instructor in three disciplines, a long-standing Media Member of the National Shooting Sports Foundation as well as a card-carrying life member of the Second Amendment Foundation, The Gun Owners of America, life member of Arizona Citizens Defense League, one of the first 100 members of the advocacy group Georgia Carry.org and a vocal 2nd amendment activist in every aspect of his life. He is a husband and the proud father of two great kids residing outside the metropolitan Atlanta area. Mark defends our freedoms with the RIGHT voice at the RIGHT time and brings a frank discussion of the right to bear arms at a time this right is threatened as never before. It’s a historic time to be a gun rights defender and Mark holds nothing back SIX days of every week, live on the nation's airwaves.