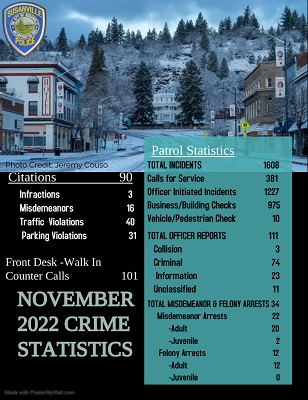 November’s Susanville Police Department has released November’s crime stats. Dispatch received over 1600 incidents throughout the month, slightly down from October’s numbers. Resulting was 34 arrests, 12 of those for a felony, significantly down from the month prior as well. 40 Traffic violations were cited, along with over 30 parking tickets issued. A significant reduction in misdemeanor violations was awarded in November, with only 16 given compared to October’s 46. The department will continue to release monthly statistics to highlight the work of the recently fully staffed department and provide transparency to the community.

Non-Emergency Lines Down for LCSO and SPD