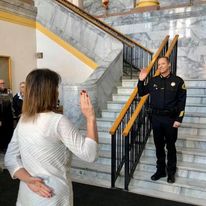 Sheriff Todd Johns will be running for the Sheriffs-Coroner office in Plumas County in this June’s local election. The current Sheriff announced his candidacy despite being up for retirement this May. The sheriff said simply, “there is still a lot of work to be done in the county to rebuild our communities.” Johns currently holds the office of Sheriff Coroner as he was appointed by the Plumas County Board of Supervisors to serve out the unfinished term of his predecessor Greg Hagwood. This election will be Johns first.