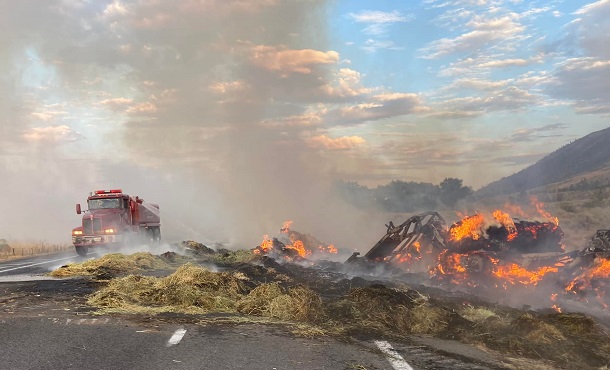 A tractor-trailer carrying a load of hay caught fire yesterday evening shutting down US 395 for 4 hours. Just after 6 pm, the Susanville Ca Highway Patrol responded to the incident near Flux road in Milford on 395. The hay load fully engulfed in flames spilled onto the roadway blowing smoke across the roadway and reducing drivers’ visibility. By 6:45 both directions of the highway had been shut down. A dozer was brought in after flames had been knocked down by fire responders to clear the roadway. After two hours a pilot car was able to help escort vehicles through the open lane. By 10 pm 395 re-opened in both directions. The tractor-trailer breaks may have been the cause of the fire yet further details have yet to be released. It is unknown if there were any injuries resulting from the incident.

SUV Crashes into RV Trailer Throwing One Man into His Refridgerator

Home-Made Explosive Shuts Down US395 in Susanville