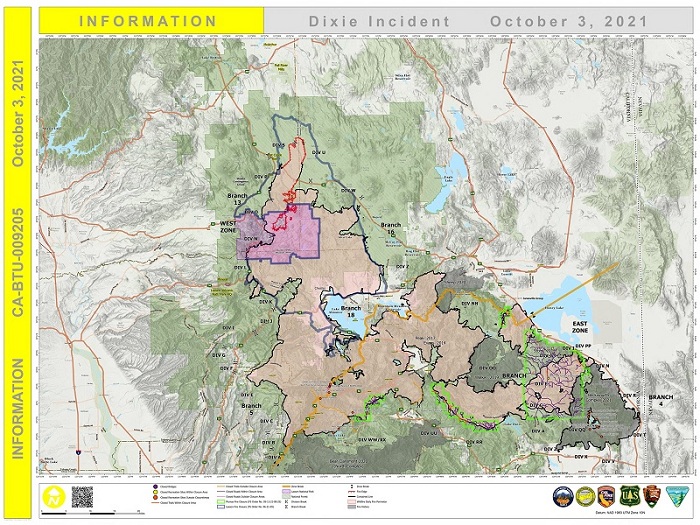 Forest Service News Release
Dixie Fire West Zone Update for Sunday, October 3, 2021
963,309 Acres 94% Containment 1,805 Total Personnel
West Zone Fire information line – (530) 592-0838 (8 a.m. to 8 p.m.)
Email – [email protected]
WEST ZONE UPDATE
Yesterday
The fire was more active yesterday and smoke was visible. Firefighters answered service calls and were able to
determine that the smoke reports, including one near Wilson Lake were well interior and not a threat to containment
lines. Equipment continued work along Highway 89 stacking and removing debris. Crews continued suppression repair
work in the area around Silver Lake and patrolled the perimeter of the West Zone.
Today
Fire activity and smoke is expected in the unburned fuel within the fire’s perimeter, but no additional growth is
expected. Firefighters will patrol the perimeter, mop up areas of heat, and be available for initial attack throughout the
day.
Firefighters will continue suppression repair work of dozer lines on all perimeters of the West Zone. Suppression repair
work includes breaking down berms that were created when containment lines were pushed by dozers during initial
attack. Organic material such as limbs and brush will be scattered back across the dozer line. Breaking up the soil
berms and spreading out woody material allows it to cool to minimize smoke production and limit reburn potential.
Additional fire crews will be assessing and felling fire-weakened trees that could be a danger to repair equipment and
crews.
Weather
The warming and drying trend will continue today, winds will remain light and mostly terrain driven, shifting to
westerly in the afternoon. Temperatures are expected to reach the 80s with sunny skies. Minimum relative humidities
are expected in the single digits.
Closure
A closure order remains in effect for some areas of the Lassen and Plumas National Forests. For more information,
please visit https://inciweb.nwcg.gov/incident/closures/7690/ or visit our interactive Dixie Fire forest closure
map: https://arcg.is/1re8my0
East Zone Information
For the East Zone update, visit https://inciweb.nwcg.gov/incident/7690/
Follow QR Code or link below for contacts and additional information
LINKS – InciWeb the Incident Information System (nwcg.gov)