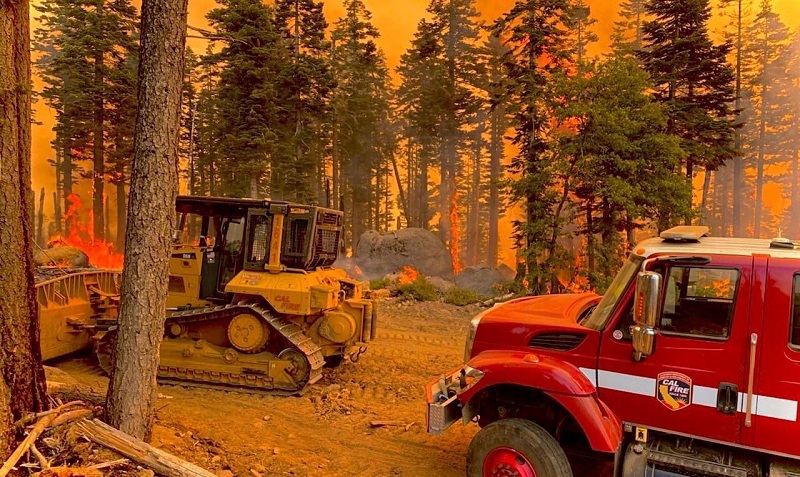 Forest Service News Release
Dixie Fire Update for Thursday, September 9, 2021
927,320 Acres 59% Containment 4,846 Total Personnel
Lassen and Plumas National Forests – A critical Fire Weather Watch issued by the National Weather Service in Reno
is in effect for thunderstorms and frontal winds this evening through Friday. Thunderstorms, strong outflow winds,
and light rains are likely tonight, then gusty winds and low humidity are expected through the day tomorrow. Very little
fire growth occurred yesterday and overnight in the East Zone of the Dixie Fire. Occasionally, in the heat of the day,
isolated flareups occure well inside of the firelines. Fire moves into pockets of unburned fuel or rekindles fallen pine
needles creating areas of smoke and threatening containment. Fire to the north of Grizzly Ridge has burned into light regrowth from the 2019 Walker Fire, and in the southeast corner, fire burned into the 2021 Sugar Fire scar and stopped.
Last night’s night shift included over 250 firefighters, which is a significant increase in fresh personnel over previous
shifts. Crews are patrolling the entire fire area day and night, providing structure protection, responding to smoke reports,
and closely monitoring containment lines. Fire continues to burn in the very steep terrain of the Devil’s Punchbowl south
of Taylorsville. Moderate fire activity in the area involves backing and short flanking runs in ground fuels occurring in the
heat of the day. Today, hotshot crews are going direct with the help of water drops from helicopters, piecing together areas
of open rock scree in the avalanche chutes, and constructing direct handline around the uncontained perimeter. Working
with resources from the West Zone, two type 1 hotshot hand-crews had success yesterday and overnight building direct
containment line and putting out hot spots on the steep slopes of the escarpment above Highway 395 south of Milford.
Today, hand-crews continue to hold the fire in the very steep terrain northwest of Dixie Peak, and crews and heavy
equipment are building contingency lines along the Beckwourth-Genesee Road.
Dixie Fire West Zone – Last night at 7PM Old Station was put under a Mandatory Evacuation Order. The wind
continued into the evening increasing the fire activity. The northern portion continued to have active runs in the brush
and ground fuels with occasional group torching. Interior islands continued to burn and smolder through the night. Heavy
fuels continue to consume throughout the fire perimeter. Additional resources assigned to the Shasta sector work to build
and reinforce lines today due to the predicted fire activity in the area. Additional engines, hand crews, and fuels reduction
projects are ongoing in the area. These additional resources will also help to strengthen lines on the fires edge and to
prepare for the extreme weather event predicted for this Thursday and Friday. The California National Guard continue
their efforts with West Zone crews in the Lassen Sector on north side of HWY 44. The Burlington Northern Santa Fe fire
train continues to deliver 30,000 gallons of water, per load, to fill water tenders, allowing for a faster return to the fire
today. The West Zone is working in conjunction with the East Zone south of Janesville and Milford, along the 395 corridor
and up to the escarpment. Fire crews have installed thousands of feet of hose, scrapped 10-blade-wide dozer lines, and
reinforced containment lines with retardant from the mobile retardant base in Hurlong. Smoldering vegetation is still
expected In the Lake Almanor area. Crews aggressively continue to reinforce the lines in very steep and rugged terrain in
the Lassen Volcanic National Park.
Residents will see smoke coming from trees and stumps for days following their return. Proceed with caution, burned out
areas may have unseen hazards. Residents are encouraged to call 911 if they are concerned about any active flames near
their homes or businesses. Damage assessment is ongoing. The changing count of threatened structures in the update is
due to changes in fire status and the evacuation warnings in Lassen, Plumas and Shasta County.
*A firefighter assigned to the Dixie incident passed away, due to an illness on September 2.
Follow QR Code or link below for contacts and additional information
LINKS – InciWeb the Incident Information System (nwcg.gov)
###
USDA is an equal opportunity provider, employer, and lender.