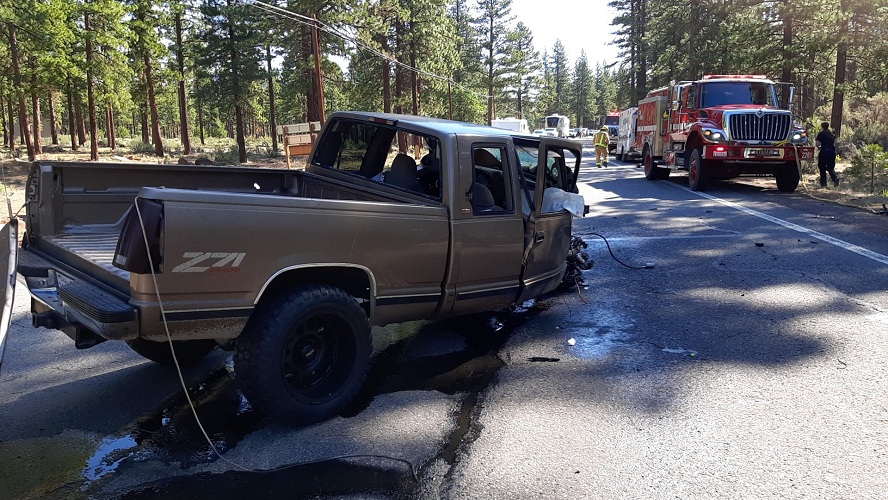 Press Release**
Collision Leads to DUI Arrest.
On June 20, 2021 at approximately 0910 hours, Mr. Davison, 34 years old from Susanville, CA, was driving a 1997 GMC pickup eastbound SR-36 near County Road A-1 (Eagle Lake Road) at an approximate speed of 60 MPH. Mr. Holmes , 46 years old from Delano, TN, was driving a 2019 Freightliner tractor in combination with a flatbed trailer, hauling approximately 45,000 lbs of building materials, westbound on SR-36 approaching County Road A-1 at approximately 45-50 MPH. Due to Mr. Davison’s level of intoxication, he allowed his vehicle to drift to the eastbound shoulder. Mr. Davison over-corrected to the left, causing the GMC to rotate slightly in a counterclockwise manner. The GMC crossed the center line and impacted the flatbed trailer. The collision resulted in major damage to the axle assembly of the trailer and major damage to the GMC. Mr. Davison was found to have been drinking prior to the collision and was subsequently arrested for DUI. Mr. Holmes was uninjured in the collision. Mr. Davison suffered moderate injuries and was transferred to Banner Lassen Medical Center for further treatment.
The debris from the collision and subsequent cleanup effort resulted in SR-36 being closed for approximately 1 hour before 1-way traffic control could be safely established.
The California Highway Patrol would like to remind everyone that you should never drink and drive.
The Susanville Area CHP Office would like to thank the Lassen County Sheriff Department for their prompt response to the scene and assistance. Additionally, we would like to thank SEMSA, Cal-Fire, and Cal-Trans for their assistance with this collision

Fatal Collision Due to Icy Roads on US 395