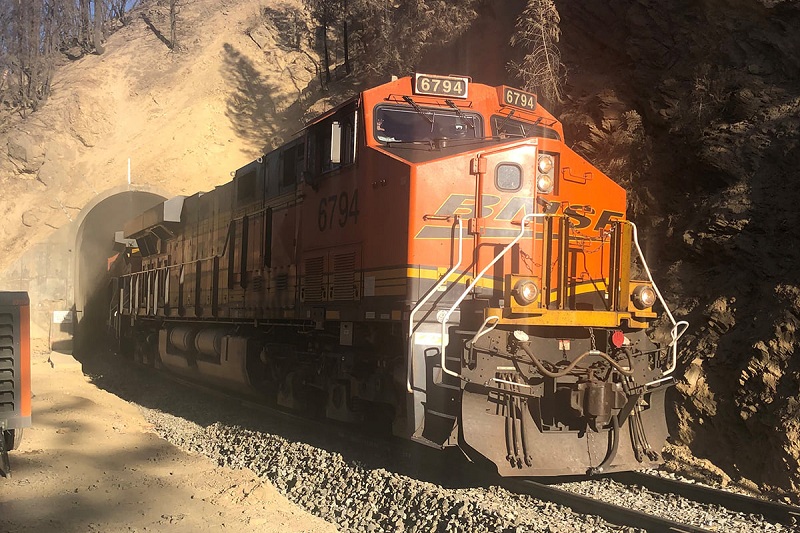 As the Dixie Fire caused widespread devastation across northern California, it also damaged BNSF infrastructure, including burning two bridges, causing a tunnel to collapse and destroying signal assets. Now, thanks to the Northwest Division’s ‘Wired Tight’ approach and the hard work of dozens of our Engineering, Transportation and Mechanical teammates and contractors, service along the route has been restored.
“The affected area is on the Gateway Subdivision, which is a 200-mile thoroughfare between Klamath Falls, Oregon, and Keddie, California,” said Division Engineer Hal Lewandowski, Engineering. “The tunnel and bridges had been out of service since mid-July. It was extremely important for us to safely reopen this route prior to Peak Season.”
BNSF employees from teams across our system cleared debris, cleaned ditches, restored slide fences, fixed signal assets and removed burnt trees and shrubs. Approximately 250 feet of the tunnel had to be mined. Then, the team installed 38 steel sets and pumped hundreds of cubic yards of concrete into the tunnel to form a concrete shell. Next, the track was reconstructed, and BNSF freight was back on the move. The photo shows the first train using the tunnel after it was reopened.
Thank you to all BNSF teams who safely restored BNSF’s service on this route.
#DixieFire #logistics #supplychain