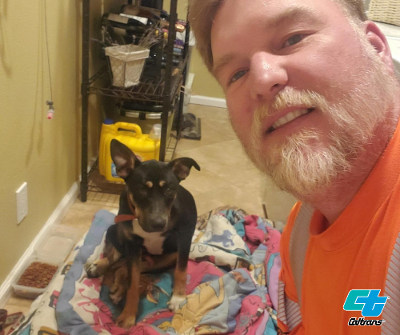 A Chester Caltrans maintenance worker reunites a beloved pet with its owner after a terrifying collision separated them in a snowstorm.

On November 2nd Tina Milberger was driving home to Willits on SR 32 around midnight when she was blinded by headlights and drove off the side of the highway. Her vehicle along with her 4 dogs traveling with her slid down 130 feet coming to rest upside down on a tree. She and her dogs were stranded.

Two District 2 maintenance employees plowing the roads from the recent snowstorm at 4 am spotted what looked like car tracks leaving the roadway. That’s when Vic Baccala and Chuck Braswell shone a light down the steep hillside. Tina trapped in the car saw the light and began to honk her horn. Her rescue came after 7 hours trapped in the car. A medical helicopter landed on the narrow state highway and took Tina to Enloe medical center for major injuries. Responders were able to rescue 3 of her 4 dogs.

That’s when Shannon Kenyon, also from Chester, was coming into his shift around 6 am that morning and heard of the missing dog. After 2 days of calling for the lost pet named Macho, Shannon made one last try before the next storm, set to arrive that evening came in, and that’s when he spotted a flash of the red collar on the dog down at the water’s edge. Shannon hiked his way down and found the dog injured and afraid. Yet he was able to scoop Macho up in his arms and hike the steep snow-covered hill back to his vehicle.

That night Shannon and his wife cared for the injured pup until the next day when they drove to Red Bluff to meet Macho’s owners and reunite Macho with his fur siblings.

A go fund me page has been set up to help with Macho’s medical costs.