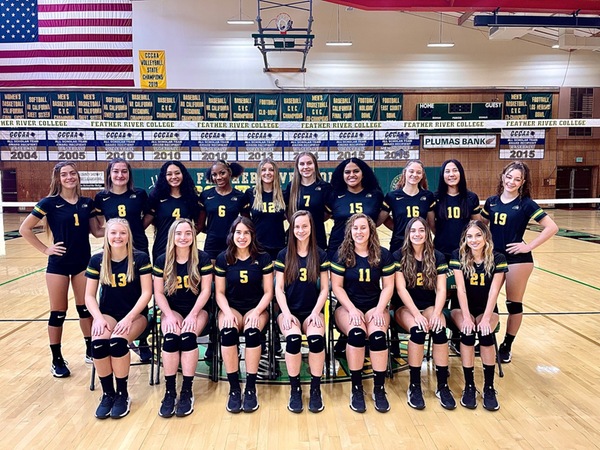 After being on the road for almost 2 months, the FRC Volleyball Program wraps up their preseason play at 17-1, and heads into Conference as the #2 Ranked team on the CCCWVCA Top 25.

The second week of September, the Golden Eagles faced their most challenging week thus far, playing in seven matches over a four day span. FRC kick started the week off in San Mateo, with a 3-1 victory over #19 Sierra College and 3-0 win over #13 San Mateo. The next day the team traveled to San Francisco, flying past the Rams in another 3-0 victory (25-14, 25-9, 25-7)

The first day of the Delta Tournament, FRC matched up with 17th ranked, Cabrillo College and Solano College. Against Cabrillo, Courtney Oilar led the Eagles’ offense with 16 kills and .750 hitting %. Libero, Madison Gray racked in 13 digs for the 3-0 sweep over Cabrillo. To follow, FRC sailed past Solano with a 3-0 victory, Hannah Shamblin-Taylor with 10 kills, while OH Molia Tuia and MB Sydnee Rowe went error-less, combing for 14 kills. Madison Steele with an impressive 10 digs to seal the win over the Falcons. Day two of the Delta Tournament, FRC faced Fresno City College in a much-anticipated match! The Golden Eagles dropped the first two sets in a hard fought battle (21-25, 23-25), then skated by Fresno in set 3, winning 25-16. The Eagles were unable to capitalize on their 3rd set momentum and wound up falling short in the 4th set, (19-25). The Rams moved up in the CCCAA rankings to the #1 and gave the Golden Eagles their first and only loss thus far. FRC then faced Cabrillo College again for the final game of the tournament, beating them 3-1. (27-29, 25-15, 25-14, 25-17) The Eagles finished the week 7-1, overall.

September 18th the Eagles headed to Folsom for a 2-game classic against West Valley College and Folsom Lake College. FRC and West Valley College last faced-off was in the spring of 2021, for an off-season scrimmage. The Eagles landed the 3-1 win over WVC on account of a strong front row presents, and tough serving. FRC had a .285 overall hitting percentage and recorded 8 total blocks. Offensively, Hannah Shamblin-Taylor (14 kills), Carissa Chainey (11 kills) and Courney Oilar (9 kills) combined for 34 kills. Taylor O’Reilly led the team in assists with 24 and aces with 4, while Madison Gray did her fair share of contributing with 20 digs and 2 aces! West Valley coming into the match co-ranked #1 with Fresno City College, dropped to #4 in the rankings, as Feather River secured #2 in the state. FRC finished the day by soaring over Folsom Lake in a 3-0 shutout.

The Eagles wrapped up their preseason play with an exhibition game against 12-1, UC Santa Cruz. The exciting 4-set match ended in Feather River’s favor for the memorable victory over the Banana Slugs, (28-26, 20-25, 25-19, 25-17) . FRC opens up Conference play this week at Lassen College on Friday, Oct. 8th at 6pm.