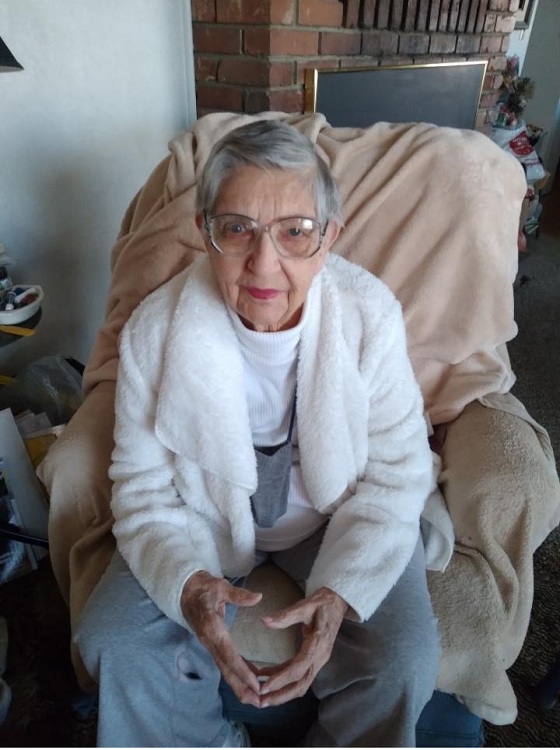 Violet Darlene Stout passed peacefully into the next life on December 27, 2022. She was born January 16, 1934 in Lassen County. Her parents, Lawrence Melvin Wood and Violet Lee Howe, both passed away when she was very young. She was raised by her paternal grandparents, George Thomas Wood and Rozlah (Hoffman) Wood.   On March 21, 1953, Violet married Tolbert D. Stout. Together they had eight children: Deborah, Rozlah, Wade, Terri, Monte, Karen, Teresa, and Jody Dawn.

Violet was preceded in death by her grandparents, George Thomas Wood and Rozlah Hoffman Wood; her half-sister, Gloria Yates Ramerman. In death, she also joins the former love of her life and father of her children, Tolbert D. Stout; her son, Wade Patrick Stout; and her daughter Jody Dawn. She is survived by her brother, Leonard Wood, 6 of her children, and her many grandchildren and great-grandchildren.

Violet was a complicated mother, grandmother, and friend, and a study in contrasts. She could be loving or hateful; gentle and kind or mean and nasty. She loved to create drama and thrived on stirring things up.

Violet loved poetry and was very proud to have been named the Lassen County Poet Laureate by the Board of Supervisors  in 1990. She held the title until she retired from the role on December 30, 2016. Upon being named Poet Laureate again in 1998, Violet claimed to a newspaper reporter that while there are poet laureates for countries and states, there were not for counties and that she was the first county poet laureate as far as she knew. It was an important role to her. “Poet Laureate is the most distinguished honor a poet can ever receive. For the honor, I will ever be grateful. Yet, a poet must have a reason to write… In poetry, the reason came from the heart (Lassen County Times, 17 Feb 1998, Page 17).” Violet’s poems reflected the topics she was passionate about and a soft heart she generally kept hidden away from view. Some poems are sweet and sentimental highlighting her family and loved ones; others are patriotic and stirring. Her later poems are political and pointed as she took to using poetry to speak her mind. Once she even took one of her poems down off the wall from city hall, claiming the Board hadn’t represented the people well and no longer deserved her poem – or so the story goes.

Violet was known for her love of birds. She put out bird seed regularly for the sparrows, chickadees, and quail and tried her best to run off the pigeons and doves who pigged out on the food intended for the smaller birds. Other animals – deer, skunks, racoons – knew all about the smorgasbord at 1418 5th Street and regularly visited the yard and porches. Violet could make dolls out of hollyhock flowers, a whistle out of a blade of grass, and find four-leaf clovers galore simply by sweeping her foot over a patch of clover growing in the yard. She hated saying goodbye and insisted on ending visits and phone calls with less final farewells; one of her favorites was “Later!”

She was known by many names – Mom, Darlene, Violet, Vi, Granny, Grandma, Grandma Vi, Grandma Violet, and a few others that can’t be listed here. Whatever those left behind call her, though, one thing can be said for sure. She was unique. We’ll see you around, Violet. Love ya, Later!

She will be missed.

Please join in a final birthday party and celebration of her life on January 16, 2023, at 1 PM at the Fink Funeral Home, 115 S. Lassen Street, Susanville, CA.